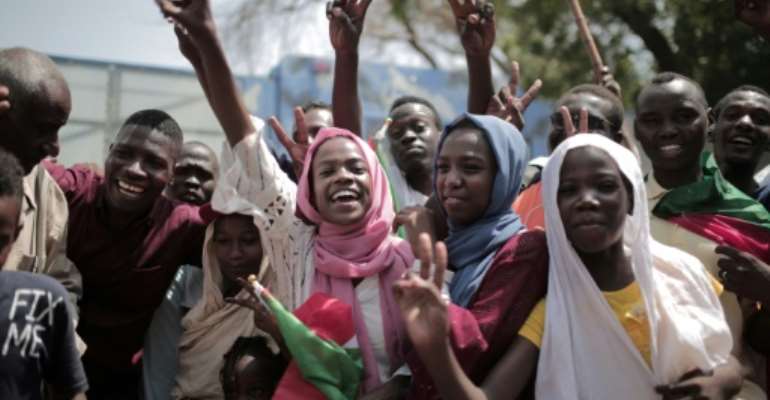 Sudanese citizens celebrate outside the Friendship Hall in Khartoum where generals and protest leaders on Saturday signed a historic transitional constitution meant to pave the way for civilian rule. By Jean Marc MOJON (AFP)

As the crowd erupted into a thunderous roar to mark the signing of a declaration on Sudan's transitional constitution, 19-year-old Ali broke into tears for his dead brother.

"My brother was shot dead on June 3," he said, referring to the brutal crackdown on a protest sit-in that eventually precipitated renewed negotiations to avert a fully-fledged civil conflict.

Doctors close to the protest movement say at least 127 people were killed and 11 went missing that day -- the darkest of an unwavering eight-month protest movement that deposed longtime ruler Omar al-Bashir and forced the generals into a compromise.

"I wish he could see this, we won. The revolution didn't die. My brother is a hero," Ali sobbed, as two friends wrapped in large Sudanese flags came to comfort him.

All day, gaggles of Sudanese men and women, young and old, converged on the Friendship Hall, where the documents that will shape the country's 39-month transition were signed.

As they walked down the long, sun-drenched streets of a city centre blocked off to traffic, they flashed V-signs and chanted the same two words: "Madaniya, Madaniya".

It loosely translates as "civilian rule", the prize the revellers hope Sudan's transition will deliver after 30 years under now-detained former president Omar al-Bashir.

The constitutional declaration signed on Saturday was agreed on August 4 and was a compromise between the protest umbrella and a ruling military council.

Residents of Khartoum -- and people from other parts of the country who came in buses and trains -- brought their children and grandparents for the occasion. 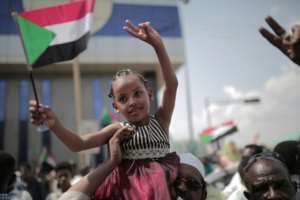 One young girl wearing jeans and draped in a Sudanese flag rode a bicycle to the conference hall, an inconceivable sight in the conservative country even a few months ago.

"This is the biggest celebration I have ever seen in my country. We have a new Sudan," said Saba Mohammed, a veiled 37-year-old woman, waving a small plastic flag.

The transition is meant to guarantee more rights and freedom and is due to culminate in elections in late 2022.

While the atmosphere was overwhelmingly celebratory in Khartoum, many residents remained cautious.

People told AFP they expect a quick and significant improvement in their economic circumstances.

At Khartoum's central market early Saturday, shoppers and stallholders all said they hoped a civilian government would help them put food on the table.

"Everybody is happy now," said Ali Yusef, a 19-year-old university student who works in the market to get by.

"We were under the control of the military for 30 years but today we are leaving this behind us and moving towards civilian rule," he said, sitting next to tomatoes piled directly on the ground.

"All these vegetables around are very expensive but now I'm sure they will become cheaper." 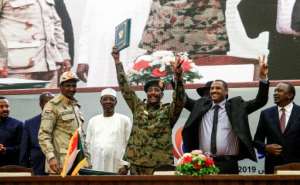 While it remains to be seen how the transition will change people's daily lives, residents old and young were eager to exercise their newfound freedom of expression.

"I'm 72 and for 30 years under Bashir, I had nothing to feel good about," said Ali Issa Abdel Momen, sitting in front of his modest selection of vegetables at the market.

"Now, thanks to God, I am starting to breathe."