U.S. Governor Of The State Of Mississippi Builds Trade Links With Ghana

By US Embassy Ghana || Accra 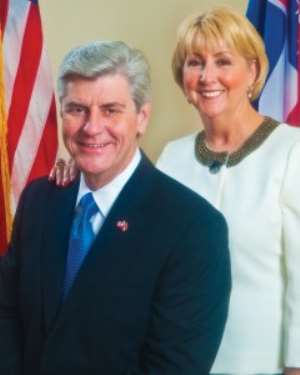 Accra, GHANA – The Governor of the State of Mississippi, Phil Bryant, traveled to Accra from August 14 – 16, 2019. Governor Bryant traveled to Ghana to expand and promote trade and investment opportunities between Mississippi and Ghana. While in Accra, he met with Government of Ghana officials, private sector representatives, local entrepreneurs, members of business associations, and scientific research stations.

Governor Bryant visited the Tema Port to observe the Ghanaian government’s investment in the port area and identify potential partnership opportunities between Mississippi and Ghana in port development. The Governor also visited Strategic Security Systems Limited, a solar panel assembly plant in Kpone in the Greater Accra Region, where he saw first-hand the positive effects of U.S. Government engagement in facilitating bilateral trade and investment ties under through the Power Africa program and the U.S. Trade and Development Agency.

He met with the Minister of Trade and Industry to learn about Ghana’s priorities to strengthen trade facilitation and to identify investment opportunities for the State of Mississippi. Lastly, the Governor met with officials from the Ministry of Health to discuss private sector investments in public health that could be forged between Mississippi and Ghana. Governor Bryant was impressed with Ghana’s vibrant private sector and investment potential.

U.S. Chargé d'Affaires Christopher J. Lamora said: “We are honored that Governor Bryant met with Ghanaian businesses, government officials, and researchers and that his delegation is exploring deepening the trade relationship between the State of Mississippi and Ghana. Governor Bryant’s visit underscores Mississippi’s key priority to promote entrepreneurship, private sector growth, and trade relations with Africa.”

Official Biography Phil Bryant was sworn in for his second term as Mississippi’s 64th governor on January 12, 2016. Before becoming the state’s chief executive, Bryant was lieutenant governor from 2008-2011. He also served as state auditor and represented his legislative district in the Mississippi House of Representatives for five years.

The son of Dewey C. and Estelle R. Bryant, a diesel mechanic and a mother who stayed home with her three boys, Bryant learned early the value of hard work and the importance of education. The Moorhead native earned an associate’s degree in criminal justice from Hinds Community College and completed his bachelor’s degree at the University of Southern Mississippi. He holds a master’s degree in political science from Mississippi College where he also served as an adjunct professor before assuming his role as governor.

Gov. Bryant began his career as a deputy sheriff in Hinds County and later worked as an insurance investigator before being elected to the House of Representatives in 1991. In 1996, then Gov. Kirk Fordice appointed him state auditor, a position he was re-elected to in 1999 and 2003.

As governor, Phil Bryant has led Mississippi in implementing transformational public education reforms, promoting economic development and building a competitive business climate that attracts major employers like Yokohama Tire Corporation, Amazon, and Continental Tire. Under Gov. Bryant’s administration, over 36,000 jobs have been announced along with more than $7 billion in new corporate investments. He is also an avid outdoorsman and is a longtime member of the National Rifle Association’s Institute for Legislative Action.