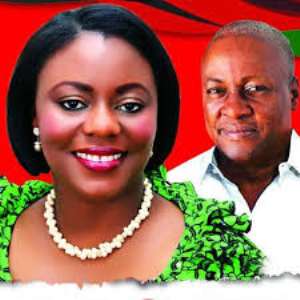 A two-week survey carried out by this reporter and his team has revealed that if the National Democratic Congress (NDC) should hold its Parliamentary Primaries in Ledzokuku this weekend, former MP Benita Sena Okity-Duah will have an edge over Ben Ayiku, a 2012 Independent Candidate. The results of the survey show that the 2012 and 2016 Parliamentary Candidate of the NDC in Ledzokuku will get 59% of the votes whilst the former Constituency Chairman will garner 41% of the votes.

The survey was carried out in 10 of the 16 Electoral Wards in Ledzokuku and it involved 300 Branch Executives/ delegates in the 24th August Primaries. In all, the researchers interacted with 30 Branch Executives in each of the 10 Wards surveyed. To the question, “Who will you vote for in the 2019 NDC Ledzokuku Primaries”, 165 said they will vote for Benita Sena Okity-Duah whilst 115 chose Ben Ayiku. 20 were undecided as at the time of the survey. The total number of delegates in Ledzokuku is a little over 1900.

Out of the Electoral Wards surveyed, Benita Sena Okity-Duah appeared to be stronger in most non-Ga speaking areas within the Ledzokkuku Constituency whilst she equally did remarkable in traditional Ga dominated areas. For example, out of the 30 Branch Executives surveyed in Akro West, a predominately Ga speaking area, 19 said they prefer the former Miss Ghana over her competitor. She equally won in the Okesekor, Martey Tsuru/ Manet, Estate North and Estate South Wards.

On the other hand, Mr Ben Ayiku is expected to do better in the mid-sections of the Constituency. Per the survey, out of the 30 respondents at the Tsui Bleoo North Ward, 17 prefer the businessman over his competitor, Benita Sena Okity-Duah. Mr Ben Ayiku is also expected to have the upper hand in the Tsui Bleoo South and Aborlebu Wards. Both Candidates tied in the Sutsurunor Ward and depending on how the few days ahead go, that Ward can go either ways. 6 other Wards weren’t surveyed due to the limited resources of the researchers.

Campaign for the Primaries has intensified in the Ledzokuku Constituency over the past 14 days. Mr. Ben Ayiku has been on a promising spree in the various Wards and giving out freebies and cash to delegates. Benita Sena Okity-Duah and her team have been urging delegates to vote to retain the former MP to continue with the good job she and John Mahama started in the 2012-2016 administration.

The coming days will be very interesting in Ledzokuku but if the survey above is anything to go by, Benita Sena Okity-Duah will represent the NDC in the Ledzokuku Constituency for the 2020 Elections.

Mr. Ben Ayiku resigned his position as the Constituency Chairman to contest the August 24th Parliamentary Primaries. In 2012, he led a group of NDC activists in Ledzokuku who decided to go Independent because they didn’t want a non-Ga as their Parliamentary Candidate. He eventually did not contest the 2012 Elections, but he and his group were suspended for their tribal activities against the NDC Candidate. He was then the Vice Chairman of the Constituency.