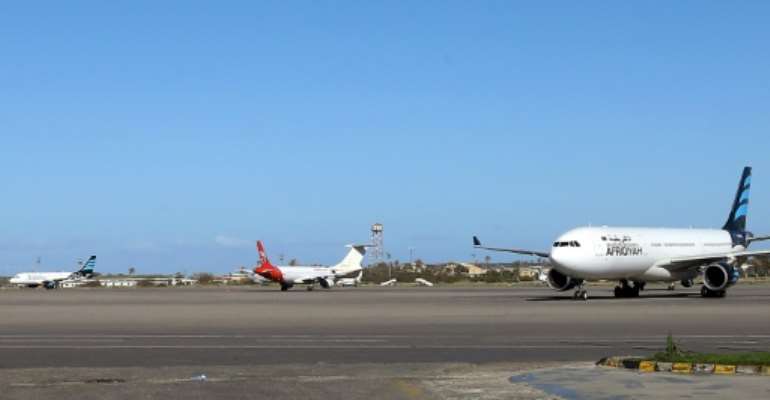 Grounded planes sit on the tarmac at Mitiga International Airport near the Libyan capital Tripoli. By Mahmud TURKIA (AFP/File)

The attack was carried out by "the militias of (military strongman Khalifa) Haftar from their positions south of Tripoli", he told AFP, adding that flights to Mitiga were being diverted.

Located east of Tripoli, Mitiga is a former military airbase that has been used by civilian traffic since Tripoli international airport suffered severe damage during fighting in 2014.

Mitiga is in a zone under the control of forces loyal to the GNA and has often been targeted, leading to repeated suspensions of flights.

Haftar's self-styled Libyan National Army launched an offensive in April to seize Tripoli from GNA forces. It has encountered stiff resistance, resulting in stalemate in the capital's southern outskirts.

United Nations envoy Ghassan Salame, in a report to the UN Security Council at the end of last month, urged "authorities in Tripoli to cease using the airport for military purposes and for the attacking forces to halt immediately their targeting of it".

The GNA protested at what it said were "untruths" in the envoy's report.