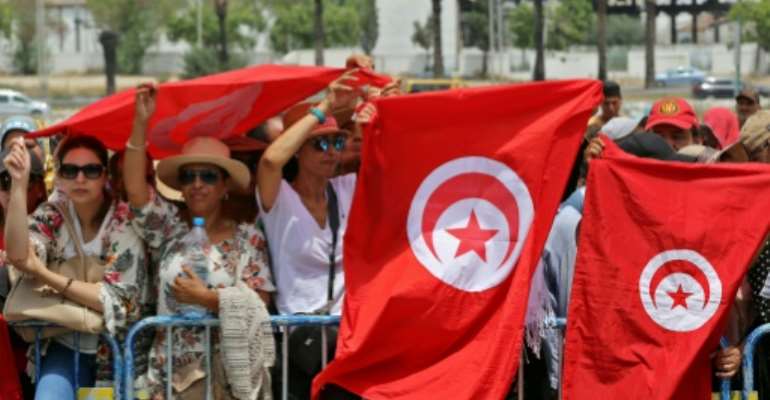 Tunisians pack a the Djellaz cemetery in Tunis on July 27, 2019 for the final farewell to president Beji Caid Essebsi, the country first democratically elected head of state who died on Thursday aged 92. By Anis MILI (AFP)

French President Emmanuel Macron and other foreign leaders attended Friday the funeral of Tunisian president Beji Caid Essebsi as the North African nation gears up for snap elections as early as September to defend the democratic gains of the Arab Spring.

Essebsi, the country's first head of state elected in nationwide polls, died Thursday at the age of 92, triggering fears of political unrest in a country seen as a rare success story following the Arab Spring uprisings.

Thousands of mourners lined the 20-kilometre (12-mile) road from the presidential palace in Carthage, where the body was laid in state, to the Djellaz cemetery in southern Tunis where Essebsi was to be buried.

Officers in full uniform carried the coffin draped in the Tunisian flag into a ceremonial room at the Carthage palace packed with dignitaries, placing it on a dais.

Parliament speaker Mohamed Ennaceur, who was sworn in as interim president hours after Essebsi's death, paid tribute to the late leader describing him as "the architect of national reconciliation".

"He was determined to successfully achieve democratic transition," in the birthplace of the Arab Spring uprisings.

Macron hailed a leader who "in these times of threatening obscurantism... was keen on keeping Tunisia enlightened, tolerant and committed to univeral values."

Large crowds of Tunisians packed the cemetery for the final farewell to Essebsi, whose death coincided with the 62nd anniversary of the proclamation of a republic in the North African country.

"President Beji Caid Essebsi belongs to the Tunisian people and each Tunisian has the right to attend his funeral," the late leader's son Hafedh Essebsi said in a Facebook message on Friday.

The interior ministry said it was deploying a large number of security forces to guarantee a smooth ceremony, adding however that it would respect "spontaneous gatherings by citizens". 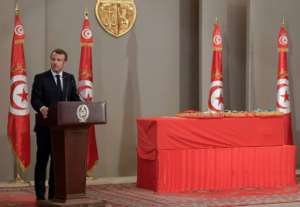 French President Emmanuel Macron was one of several foreign leaders to attend a state funeral for Tunisian president Beji Caid Essebsi in the capital Tunis. By Fethi Belaid (POOL/AFP)

Essebsi is the first president to receive a state funeral since Tunisia gained its independence from France in 1956 and the government has declared seven days of mourning.

The country's first president Habib Bourguiba was buried in a hasty ceremony in 2000 during the reign of his successor, the now ousted autocrat Zine El Abidine Ben Ali who lives in exile in Saudi Arabia.

Following Ben Ali's departure, Essebsi founded the secularist Nidaa Tounes (Call of Tunis) party, which he led to victory at the polls in 2014.

The party formed a coalition with the Islamist-inspired Ennahdha, which lasted four years before the two parties split.

Essebsi's death comes amid a power struggle between Prime Minister Youssef Chahed and the president's son, that has led to the premier being sidelined from Nidaa Tounes to form his own rival party, Tahia Tounes.

It also comes amid a debate over who will be able to stand in the presidential election which the electoral commission said could "probably" be held on September 15, two month earlier than planned.

Under the constitution the interim president has 90 days to organise elections. 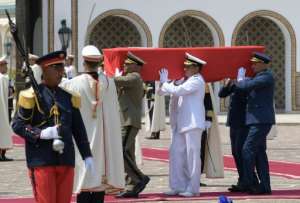 Tunisia is gearing up for snap elections as early as September following the death of Essebsi amid uncertainty over who could step forward to run the birthplace of the Arab Spring uprisings. By Fethi Belaid (POOL/AFP)

Essebsi, whose health deteriorated in the past few weeks, has left behind unfinished business.

Top of the list is a constitutional court that has yet to be set up eight years after the Arab Spring, and an unprecedented bill which if passed by parliament would have given women equal inheritance rights as men.

He has also neither rejected nor enacted an amended electoral code passed by parliament in June that would bar the way for several presidential candidates, including media magnate Nabil Karaoui.

Despite the uncertainty, Chahed hailed a "peaceful transfer of power", while interim leader Ennaceur vowed that "the state will continue to function".

Tunisia's Arab Spring saw a series of democratic reforms even as the North African country battled political unrest, a sluggish economy and jihadist attacks, which exacted a heavy toll on the key tourism sector.