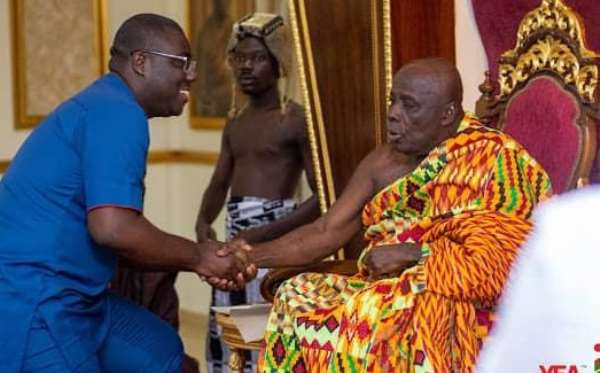 The Youth Employment Agency (YEA) has decided to set up a cassava plantation together with a processing factory in the Eastern Region.

The announcement was made by Chairman of the YEA Board and National Organiser of the governing New Patriotic Party (NPP), Sammi Awuku.

He said this when he led a delegation together with Chief Executive Officer (CEO) of the agency, Lawyer Justin Kodua Frimpong, and some board, management members and YEA ambassadors paid a courtesy call on the Okyenhene, Osagyefo Amoatia Ofori Panin, to introduce new initiatives of the agency (Job Centre, Artisan Directory and the Regional and District Flagship programmes) to him.

As part of its Regional and District Flagship programmes, the YEA intends to cultivate a cassava plantation. Besides, it is considering plans to build a processing factory in the Eastern Region.

On his part, Lawyer Kodua talked of the likely benefits these new initiatives were going to present to the Ghanaian, especially the youth.

He reiterated government's commitment to create sustainable jobs for the youth in a bid to end the seeming recycling of youth unemployment in the country.

The Board Chairman and CEO, therefore, called on the Okyenhene to support YEA in the region and implored him to use his influence and networks to garner investor support for the agency.

An obviously excited Osagyefo Amoatia Ofori Panin commended the agency for its commitment to the mandate of job creation. He urged members of the agency to lead the path of Ghana’s development as envisioned by the President.

He, therefore, called on government to employ innovative ways to shift the focus of the youth from small-scale mining to agriculture. He posited that it is only through agriculture, education and infrastructure that Ghana can become great after 62 years of independence.

Leadership of the agency has since pledged its commitment to empower and improve the livelihoods of young people as mandated by the Act.

Chaos during inauguration of Parliament unjustifiable – Bagb...
21 minutes ago

Bagbin declares NPP as Majority with Fomena MP
21 minutes ago