To Loom Or Not To Loom 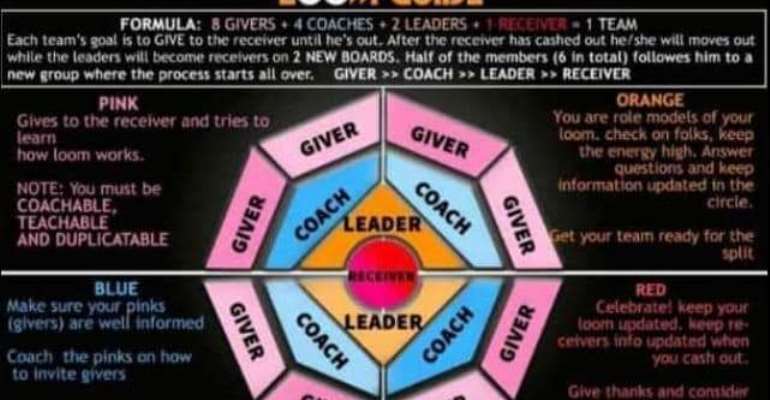 Loom is trending, some are defending it with their lives and taking offense at those ringing alarm bells that it might not be really gold despite glitters

What is loom all about and how should one approach it.

Loom is a Pyramid Scheme involving a maximum of 15 people.

With Loom, everyone has to bring on board two people to ensure there is movement.

This is how it works. LOOM is controlled by the individuals in the group, it does not go through a centralised system and so each group is a separate entity from other LOOM groups

The first person, the initiator of a group is the RECIEVER. The receiver is the first level of the group and he determines how much one has to pay before joining the group. So if the RECEIVE makes a deposit of 200 Cedis, that becomes the amount one needs to pay to be a member of the group. The first two people who come on board become LEADERS. Each Leader has to bring two people on-board. This makes four additions by the leaders and they become COACHES.

So now, you have One Receiver, Two Leaders and Four Coaches. As I said, everyone has to bring in two people so that responsibility of bring people in moves to the Coaches.

The moment each coach brings in Two people, the cycle has ended, the receiver leaves the group altogether and what is left is splitted into two so that each Leader moves to the Receiver stage. In the two new groups, the 4 Coaches become the new leaders and the Givers move to Coaches.

Then the cycle continues. As long as you get people to join and make their deposits, you are in business.

My Opinion
Ideally, LOOM should be safe, it doesn't have any centralised figure in the shape of a Nam 1 and once the RECEIVER exits, it's up to the rest to keep it going, those involved have to be motivated and keep working to get people on the board.

This is all you need to know about LOOM, it's not a scam. The fact that nothing else depends on the receiver after cashing out means that the cycle can continue.

It's not like the regular pyramid schemes that crushes because the base has become so huge that monies from new entrants cannot go round.

LOOM crushes when those involved refused to contribute or are unable to add on.

Maybe, just maybe, the biggest threat to LOOM is the bad publicity