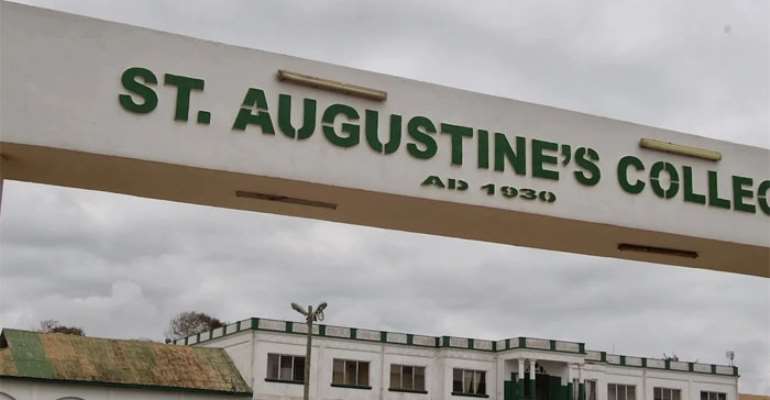 There is no doubt that in today's Ghana, the city of Cape Coast boasts of the highest concentration of the best schools in Ghana – Mfantsipim, Adisadel College, St Augustine's, Wesley Girls High School, Holy Child School, Ghana National College, Aggrey Memorial School… add University of Cape Coast and top it up with Cape Coast Technical University… truly Cape Coast is the educational capital of Ghana.

I have been to St Augustine's only once, and that was in 1990 when I took my drama group Theatre Mirrors there for a performance of 'The Trial of Nelson Mandela”.

“Captain, we are doing an Anniversary this Saturday, 15 June and we want you to come as Special Guest of Honour … before I could respond the line went dead.

Me, Captain, old boy of Achimota School, to be invited as “Special Guest of Honour” to St Augustine's ? No. The school is over 80 years old, with tall list of famous old boys, including Ambassador Kabral Blay Amihere… no, there is something wrong somewhere.

“Captain, sorry, the network was bad. This is the Headmaster….”St Augustine's?”

“Yes, Honourable. We are celebrating our 5 th Anniversary at NSAPOR Berekum … sorry for the late contact – it was difficult getting your number…”

Now I understand, St Augustine's Senior High School in Berekum, my hometown, celebrating their 5 th Anniversary. Very well, I am Presby not Catholic, but as former MP for the area, why not?

Friday evening circa 10pm we left Accra for Berekum, and after filling petrol at Achimota, I slept, only to wake up to find the car at a standstill.

“Driver, what is the problem?”

“Captain there is an accident which has blocked the road.

After about one hour, a local boy volunteered a detour route which took us through thick bush – along the old abandoned disused Accra-Kumasi highway, then after about 10 kilometers, we hit the main road at Anyinam, and continued our journey. We got to Berekum around 7.30 in the morning.

The programme was billed to start at 9am and I was ready, but my personal advisors suggested that we wait awhile. One of them made a valid point.

“Captain, this is a Catholic Institution, and as for the Catholics they don't joke with discipline. Let's go…”

Reader, we got to NSAPOR, 2 kilometers outside Berekum to see that the programme had taken off already. We were late!!!

A Guard of Honour of the School's Cadet Corps under the command of a female student formed up a marched past in salute and the school's cultural group entertained us with a rapturous performance.

The DCE for Berekum West, Hon Isaac Osei was around, and he spoke beautifully, donating 10 ceiling fans and making very nice statements about the school.

You know at such functions, people hardly pay attention apart from those of us at the high table. He spoke of course in English and rattled on and on …

According to him, in the year 1955 Japan made a national survey, and discovered that average life expectancy was 61 for men and 60 for women. Nuclear families were on an average of 6 and the population basically rural, farming.

After 50 years of vigorous educational policy, Japan had changed. Another survey in 2005 showed remarkable results – life expectancy has increased to 80 years for both sexes, family size has reduced averagely to 4 and percentage in agriculture drastically reduced in favour of industrialization.

In his Report the Headmaster Rev Fr Kumi said the school has a student population of 248, predominantly a Day School, with 41 staff and a tall list of problems – classrooms, dormitories, computers, sick bay, staff common room ……… they seem to be a school struggling to survive.

You can imagine the paparazzi – all over with their cameras. There was one particular elderly man, definitely over 60 years old, with a pronounced all white beard, holding a small camera pitched on a pole, in jeans and back T shirt, all over the place on the Anniversary ground – one minute he is here, the other minute over there, wiping his white beard.

It was now past 3 pm, and the Chairman for the occasion, Osaberima Kyere Dartey II Benkumhene of Berekum Traditional Area and Chief of Nsapor, my boyhood friend in the 80's, a renowned contractor in Accra – he summarized everything up beautifully, pledging the support of Nananom for the school.

We left for home at about 4 pm.