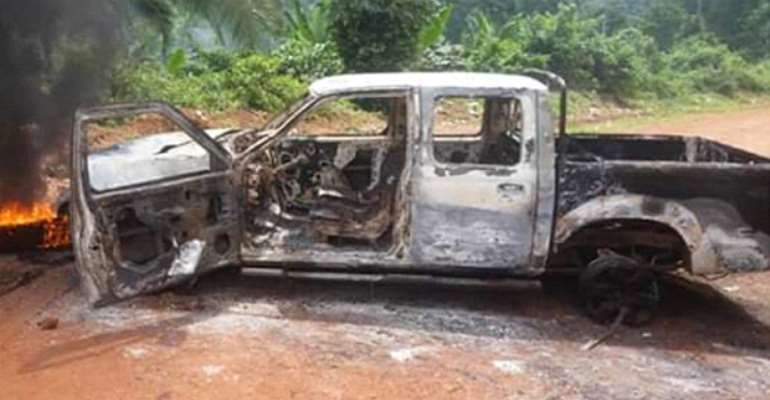 One of the company's vehicles burnt by the angry workers

Workers of Ghana Bauxite Mining Company at Awaso in the Western North Region went on the rampage last Monday and in the process burnt some of the company’s vehicles and offices.

The unfortunate action by the workers was to protest against what they termed “their poor working conditions”. Besides, they called for increment in their monthly salaries and allowances.

The rampaging staff also vandalized the bungalow of their Chinese manager and burnt down cars belonging to the company. They also burnt lorry tyres causing vehicular traffic in the town.

In March this year, the angry workers embarked on a similar exercise to demand better working conditions.

In their earlier demonstration, they complained that the company was not paying their Social Security and National Insurance Trust (SSNIT) contributions. They also expressed their reservations about their unsafe working environment.

During last Monday’s demonstration, personnel from the Ghana National Fire Service in the area were prevented from entering the premises to quench the fire.

Joseph Kingsley Mbrah, Assistant Municipal Fire Officer in the area who confirmed this, said the workers blocked the road leading to the company’s premises to prevent the fire men from gaining access.

“So I had to call the police. When the police arrived and assessed the situation, they parked the fire tender. So we used some fire extinguishers to quench the fire at the Human Resource (HR) office. As for the company’s vehicles, they had all been burnt to ashes when we arrived,” he added.

George Ampong, the HR Manager, indicated that negotiations on the workers grievances started sometime in November and December last year in Accra, but it got to a point the workers claimed the pace had been slow.

“So they embarked on a demonstration for nine days and the chief of the area, Nana Kwame Amponsah III, urged members of the Awaso Development Committee to intervene,” he disclosed.

He noted that several meetings were held with the workers who agreed to allow the negotiations to continue.

“The workers were to go to Accra for the negotiations, but they insisted the meeting should be held at Awaso. Two meetings were held but the General Manager was not available for the meetings.

“So on Thursday and Friday, the workers met with the General Manager and claimed that the company had allegedly refused to meet their demands, hence their protest,” he noted.

Anti-LGBT Bill: Let's be careful and not generate intense ha...
42 minutes ago