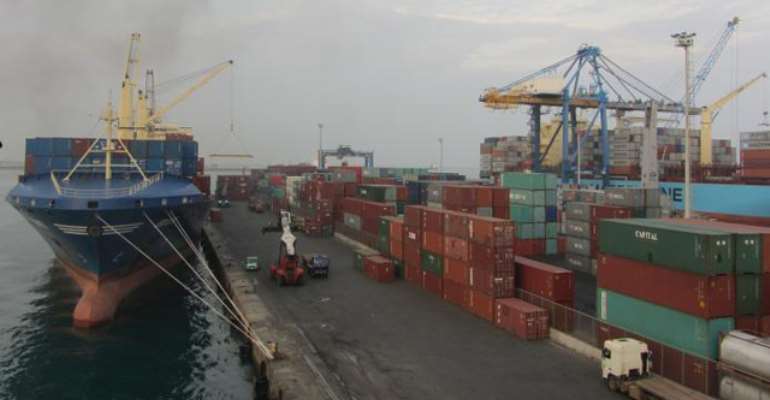 The Ghana Employers Association (GEA) has called on Akufo-Addo government to take steps to save the businesses of their members from collapsing due to the ongoing Tema Port Expansion project.

The project is a Public-Private Partnership between the Ghana Ports and Harbours Authority (GPHA), representing Government and Meridian Ports Services (MPS).

It involves an upgrade and significant expansion of Ghana’s main seaport.

However, a statement issued by the Association said "with the monopolistic rights of MPS under the project, the Ghana Ports and Harbours Authority (GPHA) and other operators in the Tema Port such as Terminal Operators, Inland Container Depots (ICDs), Stevedoring companies and Shore handling companies, among others stand the risk of losing huge revenues, that may lead to the collapse of many container-related businesses, Stevedoring Companies, Scanning services, and job losses."

They want the government to take immediate steps to engage operators within the Port enclave to thoroughly discuss and agree on terms that will ensure the uninterrupted business activities of these Companies.

We would like to bring to your attention some concerns of members of the Ghana Employers’ Association (GEA) operating in the Shipping and Ports industry which require urgent attention in order to save their businesses from imminent collapse as a result of the ongoing Tema Port Expansion Project.

These concerns include the following;

1. Future of the Companies that undertake Scanner/Inspection services 2. The fate of Container Service Companies 3. Huge loss of jobs that are likely to be encountered as a result of the project 4. Recruitment of new workers to replace existing skilled staff 5. Influx of Stevedoring Companies within the Port enclave.

In spite of the benefits that the country stands to derive from this project, the GEA is anxious about these emerging business concerns and challenges that are associated with the project.

With the monopolistic rights of MPS under the project, the Ghana Ports and Harbours Authority (GPHA) and other operators in the Tema Port such as Terminal Operators, Inland Container Depots (ICDs), Stevedoring companies and Shore handling companies, among others stand the risk of losing huge revenues, that may lead to the collapse of many container-related businesses, Stevedoring Companies, Scanning services, and job losses.

It is against this background that GEA recommends the following:

1. That the Ministries of Trade & Industry and Transport take an immediate step to engage operators within the Port enclave to thoroughly discuss and agree on terms that will ensure the uninterrupted business activities of these Companies. 2. That the Ministries of Trade & Industry and Transport specifically engage the Ghana Ports and Harbours Authority (GPHA) and the Meridian Ports Services (MPS) on the issues that have been raised by the operators taking into account the potential unemployment impact, revenue losses and social implications that are likely to be associated with the expansion project. 3. In more distinctive terms the GEA requests that the service agreement between the Government of Ghana and the various Scanning and Inspection services must be enforced to avert any estrangement. 4. That the Ministry of Transport initiate steps to engage Meridian Port Services(MPS) to absorb the existing experienced employees that are likely to be made redundant in the Inland Container Depots rather than recruiting employees from elsewhere, with the view to reduce the huge job losses. 5. That the issue concerning the registration and regulation of Stevedoring companies should be properly evaluated to maintain business viability and sustainability. 6. That since the Ghana Dock Labour Company(GDLC) has over the years played a major role by being consistent and reliable in the supply of Labour services to the Ports, its services should be continuously being employed to meet the Labour requirement of the new facility.

Future of Scanner and Inspection Services

Already the Scanning and Inspection Companies offering scanning services at the ports already have a long term agreement with Government to provide scanning and inspection services of which they have invested heavily by way of equipment, machinery and requisite staff capacities in the execution of the service. They anticipate the loss of about 400 jobs should they cease to operate under the new facility.

Also earlier discussions with MPS and other Government officials at both the Ministries of Trade and Transport over their concerns have not addressed the issues regarding the status of their business.

Concerns over Issues Regarding Job Losses & Fate of GDLC

Members have also complained about the huge job losses that are likely to be encountered when the project takes off.

The Ghana Dock Labour Company Limited (GDLC) a limited liability company which was incorporated in 2002 by Dock Labour Employers (DLE) and the Maritime and Dockworkers’ Union with the core mandate of supplying causal Labour to the Port and its environs, stands the risk of laying off about 3000 staff currently serving the GPHA.

GDLC was not meant to be a profit making company but rather a pool from which all stakeholders doing business in the port will take labour at a cost determined by GPHA (Regulator), DLEs and MDU. Records shows that this arrangement was a carefully thought-through idea, engineered to streamline Port Operations and the constant agitations by Dockers operating in the then Port.

Again, the arrangement was to help GPHA meet its human resource needs associated with the irregular pattern of vessel calls under the port reforms of 2002. To that end, dock labour experts and union leaders were sent abroad to study best practices in dock labour management to replicate the model in Ghana, hence the set-up of GDLC. Since its formation, GDLC has performed credibly well in executing its mandate of supplying highly qualified and experienced labour to operators of the ports.

Management of GDLC has consequently met on several occasions with the management of MPS to discuss possibilities to supply labour for the construction works and the terminal operation when completed but this had not yielded any positive results.

becomes operational. Efforts to obtain names of third party operators already contracted by MPS in the new terminal did not receive any favorable response. GDLC had hoped for an opportunity to supply labour to such companies.

With the advantage of having the most experienced workers, already trained and adapted to the port terrain in our books, GDLC had hoped that MPS would offer us the first option in the supply and management of highly skilled labour for use in the new terminal where its skilled workforce can quickly adapt to the new technology in the Port environment.

GDLC’s current allocation to MPS has dropped drastically from 7130 in 2017 to 3756 in 2018. The gap has been filled with personnel from unauthorized labour companies operating from the MPS yard.

Similarly, it is believed that MPS can give the first option to GDLC on the ongoing recruitment exercise with no harm to their brand, in compliance with their local content requirement under the concession agreement.

On the issue of local content, it must be stated that about 90% of the workers in GDLC pool come from the Tema Metropolitan area and its environs. The social benefits in employing these people through GDLC has been enormous as GDLC pays SSNIT contribution, Provident Fund, Annual bonus as well as providing healthcare for the workers.

The fate of Inland Container Services and Stevedoring Companies

Other issues that have come up are the fate of Container service companies where businesses stand the risk of folding up with the potential social implications as a result of the massive unemployment that is likely to be generated. According to businesses providing container services, they stand the risk of shedding off about 1200 jobs should they lose their business operations under the new facility.

GEA believes that the intervention at the Ministerial level should be the best option at this stage to expediently resolve these concerns and to save the several businesses and jobs that are likely to be lost as a result of the take-off of the new facility anytime now.

Office of the President Accra