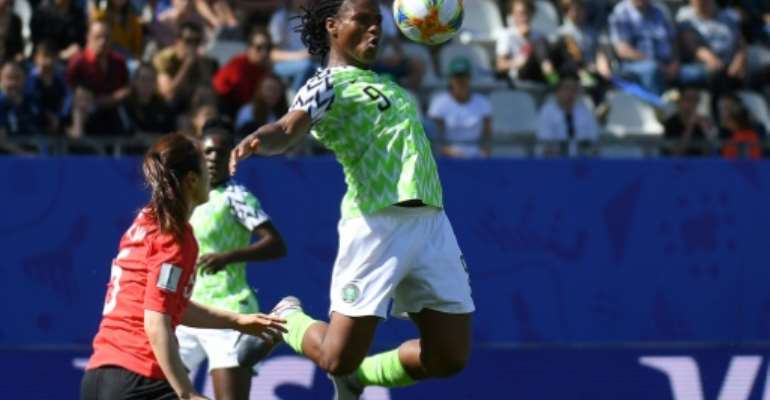 Desire Oparanozie (R) in action for Nigeria at the women's World Cup. She plays in France so Monday's clash with the hosts will be a particularly special occasion for her. By Jean-Pierre Clatot (AFP)

For Nigeria captain Desire Oparanozie, her country's meeting with hosts France at the women's World Cup on Monday will be like playing on "home soil".

"I'm excited playing in France and playing against France as well. I will have a couple of my friends in the French team," the 25-year-old tells AFP.

This is her third World Cup, and it has a special flavour given she plays her club football in France for Guingamp.

Monday's match, which is crucial for Nigeria as they seek to join France in the last 16, will be played not far from Guingamp, in Rennes.

After a 3-0 loss to Norway in their opening match, that result means the Super Falcons still stand a chance of making it out of their group at a World Cup for the first time in 20 years.

Nigeria may dominate women's football in Africa, having won 11 out of 13 Cups of Nations, but only once have they got beyond the group stage at the World Cup.

"In past World Cups, we haven't really done well and we are working very hard to make sure that we qualify from the group stage," said Oparanozie.

Changes for the better

To help them do that, the Nigerians moved last year to appoint as coach Thomas Dennerby, the Swede who led his home country to third place at the 2011 World Cup.

"He brings a whole lot of positive things in the team. He has a very broad knowledge about women's football," said Oparanozie. "We've seen a couple of changes since he arrived."

Among the most important changes were the improved preparations ahead of the tournament.

"We didn't really have that in the past. But this time is different. We had a couple of quality international friendlies and tournaments.

"We went to China, in Cyprus for the Cyprus Cup and we were also in Spain to play against Canada, so we had a good preparation for this year's World Cup."

Another of Dennerby's decisions was to make Oparanozie the captain, something she describes as "an honour" and "a great privilege".

"It always comes with a whole lot of expectations, I would say. I mean the players expect a lot from me, the coaches, the federation, the country as a whole," she said.

Oparanozie left her homeland at the age of just 17 and had spells in Russia, Germany and Turkey, eventually settling in France at Guingamp in 2014.

"It was really hard in the beginning. At that age I missed home a lot, it was cold, the food was different, the culture, the people," she said of leaving Nigeria.

"It was really difficult but looking from where I came from, I wanted to grow in my career, I didn't have any option other than to try to make a career for myself."

She also had to overcome resistance from within her own family at the idea of becoming a footballer.

"In a typical African home, they think the girls shouldn't play football, they think it's a boy's sport.

"Even in my family, they were against it, but luckily enough I had my father's support and that's what helped me to carry on with my career."

She is now eager to help youngsters who want to follow in her footsteps, and she recently set up her own foundation for boys and girls between the ages of 12 and 18.

In July, she will be back in her home town of Owerri, in southern Nigeria, to hold a seminar for several hundred youngsters.

"I organise seminars to encourage them to be whatever they want to be. That's my own way of giving back."