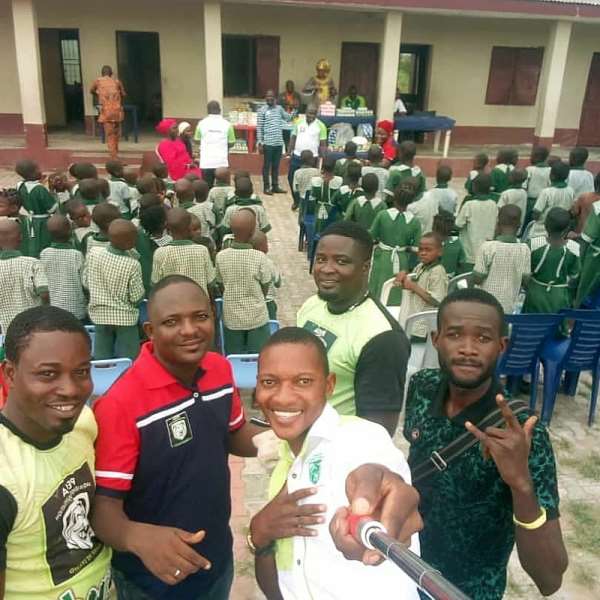 Human rights activist, Prince Ekunola Gbenga, took his Pega & Friends foundation train to Ogun State to celebrate this year’s Children’s Day with a mission statement to help the less-privileged children in Nigeria to achieve their maximum potentials by empowering them to create a brighter future through educational relief materials, support and mentoring.

Pega & Friends foundation has been reaching out since it started operations in 2010 and upped the ante last weekend by taking its yearly programme to kids in a remote village in Ogun State.

Apart from the drum set presented to the school, Pega & Friends foundation put smiles on the faces of about 500 kids who were given goody bags containing biscuits, fruit drinks, candy, notebooks, set of Mathematical Instruments and others.

Speaking through the leader of the delegation Mr. Haruna Hammed, Prince Ekunola said he was delighted to deliver on the mission statement of the foundation by giving back to less-privileged kids in the society, who he noted were the future of tomorrow.

"The drum set and other school items given out are our own way of saying we support the education and joy of the Nigerian child, irrespective of their background,” he said.

He noted that he was never in doubt of the potentials that less-privileged kids possess but added that for them to attain their full potentials they must be supported by well-meaning individuals in the society and corporate bodies, who he stated have crucial roles to play in capacity development of young ones.

The end of Ekunola’s speech was greeted by wild applause from the kids, teachers and elders who turned out in their numbers for the ceremony.

Responding, Head Teacher of Community Primary School, Olorunsogo, Mrs Okeowo B. A thanked the foundation for remembering pupils of her school, noting that it was the first time that such a gesture was being extended to them as far as her memory can recall.

As Ekunola said, Okeowo urged successful Nigerians to help the needy ones in the society, warning that failure to do such would only increase the number of delinquents in the land.

In his own response to PTA Chairman Pastor Moses Ilo, he said; "We thank Pega and friends foundation for this kind gesture and hope that others will emulate this so that the future of these little ones will be brighter.”

Afterwards, Overall best Student were honored and gifts in the goody bags were given to the pupils who beamed with wild smiles as they danced away to the blaring sound for the loudspeaker.

The representative of the Traditional Ruler of the community were not left out, the Kabiyesi Oba Samuel Olukayode Sodimu applaud the founder and members of the foundation, he prayed for continuity of the foundation.

Some of the beneficiaries who spoke with newsmen on the sidelines expressed delight, saying the kind gesture extended to them by the foundation was a major inspiration they needed to fulfil their dreams.

Overall Best Student Felicia Ilo, said: “I am happy to be celebrated and given this material today, and I pray God to bless this foundation.”

It was reported that students from different backgrounds presented songs, poems and drama centred on peace, love and tolerance among Nigerians.