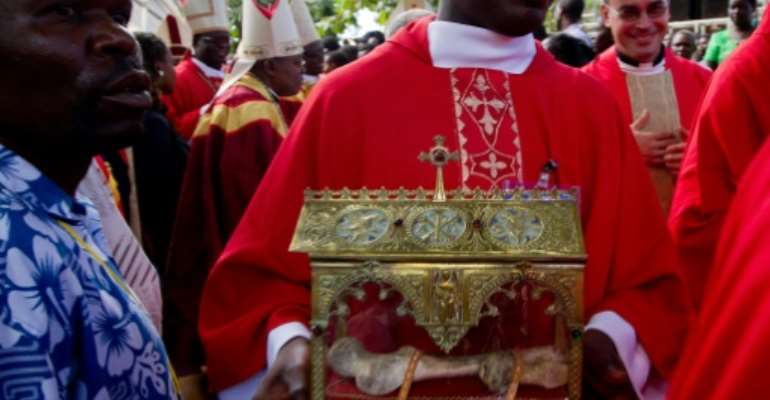 Martyrs Day commemorates 45 Anglican and Catholic converts to Christianity who were killed in the 1880s by Mwanga II, the king of Buganda, now part of Uganda. A bone of one of the martys is a revered relic. By MARC HOFER (AFP/File)

Rwandan troops blocked about 200 of their citizens from crossing into Uganda to attend a Christian pilgrimage, a Ugandan government official said Monday, amid a spat between the neighbours.

The Rwandans were seeking to attend the annual Martyrs Day commemoration in Uganda but were turned back, the official said.

"More than 200 Rwandans who were coming to attend Martyrs Day were stopped by the military from crossing to Uganda and sent back," Janinah Busingye, an official at Katuna, the border town with Rwanda, told AFP Monday.

"This is how bad the situation has become between Uganda and Rwanda. People's right to worship is now being interferred with."

She said pilgrims from the Democratic Republic of Congo and Burundi had been using the same crossing to enter Uganda via Rwanda, and had not encountered any problems.

One 66-year-old pilgrim, speaking on condition of anonymity, told AFP she travelled in a large group to the border but was denied entry.

"We were told that we cannot cross into Uganda for the sake of our security," she told AFP.

Martyrs Day on June 3 commemorates the execution of 45 converts to Christianity in the 1880s.

Their death was ordered by the then king of Buganda, which is now part of Uganda.

They included 22 of his pages, who had converted to Catholicism and were burned alive on June 3 1886. They were beatified by the Holy See in 1920 and canonised in 1964 by Pope Paul VI.

But Rwanda closed its border with Uganda in February, freezing a key regional trade route, as hostilities between President Paul Kagame and Uganda's Yoweri Museveni boiled over.

Tensions between the two veteran leaders, once close allies, have been rising for months as the two countries trade accusations of political interference and spying.

Rwandan traders have been prevented by force from crossing the border into Uganda, where many work during the day.

In late May, Ugandan police accused Rwandan soldiers of entering the country and killing two men but Rwanda said the incident happened on its soil.

Rwanda's state minister for East African affairs, Olivier Nduhungirehe, said he was not aware of the specific case involving pilgrims but told AFP: "What I know is that our travel advisory notice is still in force for all Rwandan citizens travelling to Uganda".

Museveni did not attend the commemorations, which take place at a shrine at Namugongo, just outside the capital Kampala.

He was represented by Vice President Edward Sekandi.

The service took place at St Charles Lwanga Parish in Kigali, a church named after one of the martyrs.