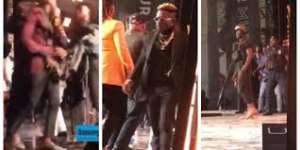 I will foremost condemn the brawl, and all other events that led to it during the 20th edition of the Vodafone Ghana Music Awards (VGMA) when Shatta Wale and his team attempted joining Stonebwoy and his team on stage when Stonebwoy was receiving his award for the Reggae/Dancehall Artiste of the Year.

Aside its shameful and bad picture it has painted about the Nation's entertainment industry to the rest of the world, it also exposed a similar insecure image of the nation: a very bad situation which has the tendency to drive away potential investors from the entertainment industry and other sectors of the economy.

I find what happened clearly avoidable because if VGMA had just paid a little attention to the organization of solid security systems for the program such as proper search at the gate, employ of a larger number of private and public security personnel, proper security education, and other civic education on peace and tolerance, which had become necessary due to some evidence of some continuous security threat highlights prior to and during the show. The indications were all over on all media platforms before and during the awards that, such a similar which happened during the awards was likely to happened, but due to how porous the security system of VGMA is, and the negligence VGMA and the country as a whole mostly pay with regards to the security of individuals and institutions, they did not bother to find potent precautions and solutions to them.

I will advise that the organisers of the VGMA should on the next time put in place a better security system for all their subsequent programs, and also immediately employ the service of a security expert or consultant if they have none.

More over, I will admonish the national security services to immediately investigate, arrest and interrogate all who were involved in the riot, and also sanction anyone whose actions had been illegality before and during the awards so as to help serve as a deterrent for all in the future.