Migrants In Libya Shot As Fighting Rages Between Rivals: MSF 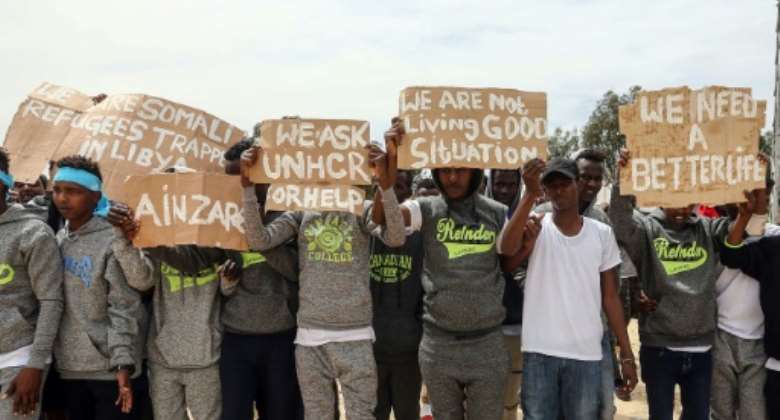 Migrants and refugees have been shot and wounded in a detention centre south of Tripoli as Libyan fighters battle for control of the capital, Doctors Without Borders (MSF) said Friday.

Clashes between Libya's Tripoli-based unity government forces and fighters of military commander Khalifa Haftar have raged since April 4, when the strongman launched an assault to seize the capital.

The UN and international NGOs have warned that thousands of migrants and refugees who fled violence at home and are now trapped in Libyan detention centres are facing enormous dangers and must be evacuated.

On Wednesday the UN refugee agency UNHCR said it had evacuated 325 asylum seekers from the Qasr Bin Ghashir detention centre a day after an attack against refugees and migrants. It was not clear who carried out the assault.

"While there were no bullet wounds, 12 refugees endured physical attacks that required hospital treatment," a statement said.

But on Friday MSF said "an analysis of existing photographic and video evidence by MSF medical doctors concluded that injuries shown are consistent with gunshot wounds".

"These observations are further supported by numerous accounts from refugees and migrants who witnessed the event and reported on being brutally and indiscriminately attacked with the use of fire arms," it said.

MSF published video footage showing several people bleeding from what appeared to be bullet holes in limbs and other parts of their bodies.

"To say we were outraged is an understatement," MSF head of emergency programmes Karline Kleijer was quoted as saying in the statement.

"Mere condemnation of the violence against migrants and refugees is meaningless unless immediate action is taken by the international community to evacuate the remaining thousands."

MSF said that over 700 unarmed men, women and children were trapped in the Qasr Bin Ghashir detention centre.

The watchdog said residents of the centre have been moved to another detention camp west of Tripoli on Wednesday and Thursday.

"While they are no longer in the direct vicinity of fighting, people are still subjected to dangerous and degrading conditions and rapidly changing conflict dynamics that continue to pose a threat to all those locked up in detention centres in and around Tripoli," it warned.

It quoted two migrants from a detention centre in an eastern suburb of Tripoli and a third one who was detained in the centre of the capital as saying armed men have forced them to work for them.

In one instance two detainees said they were ordered to repair military vehicles and "to load, unload, and clean weapons", including machine guns, HRW said.

Libya, long a major transit route for migrants desperate to reach Europe, is home to around 6,000 migrants who are held in official detention centres, according to the International Organization for Migration.

Hundreds more are held by armed groups elsewhere in the war-hit country.

Inflation will remain high till the end of first quarter of ...
8 minutes ago