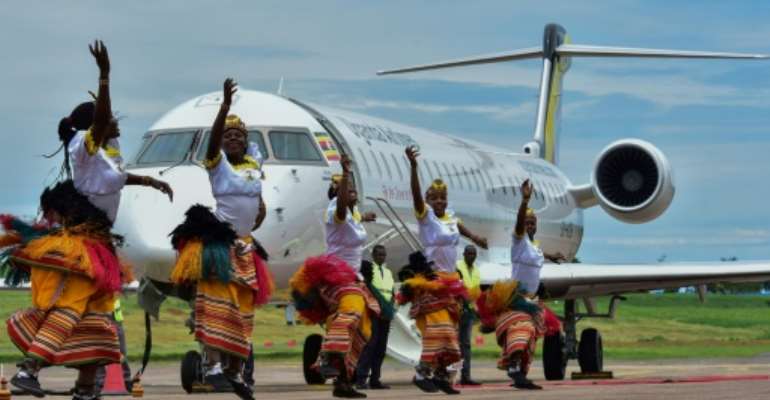 Two Bombardier CRJ900 jet airliners, which can carry up to 90 people each, landed at Entebbe airport outside the capital Kampala during a ceremony attended by President Yoweri Museveni. By Nicholas BAMULANZEKI (AFP)

The two Bombardier CRJ900 jet airliners, which can carry up to 90 people, landed at the Entebbe airport outside the capital Kampala during a ceremony attended by President Yoweri Museveni.

"We are very happy that what we started months back to restart the national carrier has begun bearing fruit," said works and transport minister Monica Azuba Ntege at the ceremony.

She added that two more planes purchased from Canadian manufacturer Bombardier would arrive in July and September.

Uganda Airlines CEO Ephraim Bagenda said the first flights on the revived national carrier would take place in July, once a 90-day certification process was completed.

The airline closed in 2001 after suffering from corruption and mismanagement by political appointees. By Nicholas BAMULANZEKI (AFP)

"The 90 days will include demonstration to the (Ugandan) civil aviation authority that we have the proper airline premises, trained staff, maintenance provision, equipment to run an airline, and systems for the safe and secure operation of an international airline," Bagenda told AFP.

He said the airline would start with flights to regional neighbours in eastern and southern Africa before expanding into Europe, Asia and the Middle East.

But some local politicians have expressed fears that the airline could suffer the same fate as it did in 2001, when it closed down after suffering from corruption and mismanagement by political appointees.

"We are eagerly waiting to see what happens next because the same problems that led to the collapse of Uganda Airlines are the same problems that persist today -- largely corruption, mismanagement and political patronage by the government," Ugandan opposition lawmaker and chair of the parliamentary committee on state enterprises, Mubarak Munyagwa, told AFP.

"We pray this time round, the airline does not end up gulping taxpayers' money for the sake of a political gimmick by the government," he added.