By Rim Taher and Imed Lamloum 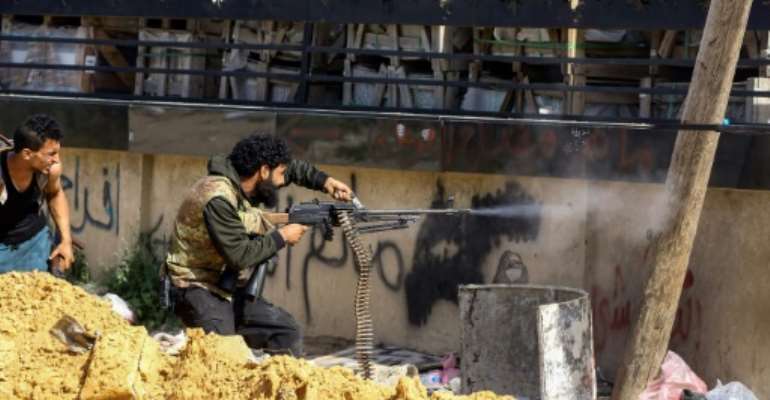 Fighters loyal to Libya's UN-backed government are defending the capital from a rival strongman's forces. By Mahmud TURKIA (AFP)

Thousands of people have fled heavy fighting on the outskirts of Tripoli that has left dozens dead and prompted mounting global alarm.

Guterres appealed Wednesday for a halt to hostilities to prevent the situation spiralling out of control.

"It's still time to stop," he told reporters after briefing the UN Security Council in a closed session in New York.

"It's still time for a ceasefire to take place, for a cessation of hostilities to take place, and to avoid the worst, which would be a dramatic, bloody battle for Tripoli."

Nearly a week of fighting on the city's doorstep has already killed 56 people and wounded 266, the World Health Organization said.

Close-up map of Tripoli locating areas hit by air strikes and potential conflict areas, according to data from the UN Office for the Coordination of Humanitarian Affairs.. By Paz PIZARRO (AFP)

"Thousands of people have fled their homes, while others are trapped in conflict areas. Hospitals inside and outside (Tripoli) are receiving daily casualties," it said.

The UN chief was in Libya when forces loyal to military strongman Khalifa Haftar last week launched an offensive to capture the capital, which is controlled by a UN-backed government and an array of militias.

Haftar backs a rival administration based in eastern Libya that refuses to recognise the authority of the Government of National Accord (GNA) led by Fayez al-Sarraj.

"Our forces continue to advance on all fronts and are converging on the centre of the capital," Ahmad al-Mesmari, spokesman of Haftar's self-styled Libyan National Army (LNA), said Thursday at a press conference.

He said the LNA had issued arrest warrants against Sarraj and other GNA officials for "treason", "support for terror groups" and "conspiracy with foreign countries".

The Security Council met for more than two hours behind closed doors to consider how to address the fighting, which has derailed efforts to end the instability that has beset Libya since its 2011 uprising.

She called for the "full implementation of the humanitarian truce" and the "return to the political negotiations and the political track".

The United Nations postponed a national conference that was to open on Sunday to draw up a roadmap to elections, meant to turn the page on years of turmoil since the NATO-backed overthrow of dictator Moamer Kadhafi in 2011.

Heavy clashes shook Ain Zara, a town dotted with farms on the southeastern outskirts of Tripoli where pro-GNA fighters managed to reverse an advance by Haftar's forces.

On the town's main street, lined with shops and houses, a sand barrier erected by pro-GNA forces separated the two camps.

"Today, the criminals of Haftar's group have advanced, but we destroyed a tank and two armoured vehicles," said a pro-GNA fighter who gave his name as Youssef.

Thousands of people have fled the fierce fighting on the outskirts of Tripoli. By Mahmud TURKIA (AFP)

Behind him, artillery fire stirred up a cloud of sand as the sound of machine guns and anti-aircraft guns rang out.

Suddenly a shell sliced through the air and hit a nearby house.

"You see, he (Haftar) wants to destroy our houses and all of Tripoli," one of the fighters shouted.

The GNA took journalists to a prison in the area, where director Ayad Enjem said "75 combatants" of Haftar's LNA fighters had been detained since Friday.

"Several are younger than 16 years old" said Enjem, as representatives from a UN agency interviewed the prisoners.

One detainee told AFP he was 16 and had been recruited recently in Sabratha, to the west of Tripoli.

More than 100 others are being held in a prison in the coastal town of Zawiya, some 50 kilometres (30 miles) west of the capital, according to its head Abdelbasset Abu Ajeila.

Haftar's forces, which control swathes of the country's east, said on Wednesday they had seized a barracks in the Aziziya area around 50 kilometres (30 miles) south of Tripoli after "ferocious clashes".

They said several fighters loyal to the UN-backed government had been detained and their weapons seized.

Tripoli is controlled by a UN-backed government and an array of militias. By Mahmud TURKIA (AFP)

"For the moment, it's still a game of cat and mouse," a commander from a pro-GNA group said Wednesday.

Haftar's forces appear to be advancing on two fronts, from the south and southeast of Tripoli, while coastal roads to the east and west of the city are defended by fighters loyal to the GNA.

The United Arab Emirates, Egypt, Saudi Arabia and Russia are key allies of Haftar, a former Kadhafi military chief who has emerged as a major player in Libya's political struggle.

NATO chief Jens Stoltenberg said Wednesday the alliance was "deeply concerned by the situation in Libya."

"The current military operation and advance on Tripoli are increasing the suffering of the Libyan people and putting civilian lives at risk," he said.

"If unleashed, a full-fledged offensive could become a proxy war between regional powers and cause innumerable casualties as well as immense devastation," the think tank said.