UN Council To Meet On Libya As Haftar's Forces Advance 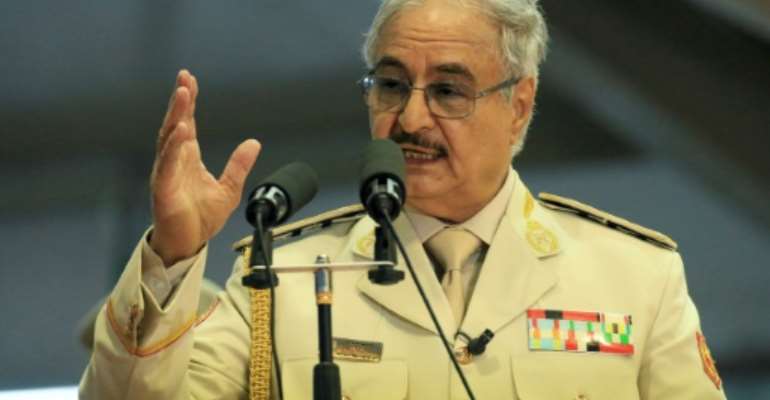 Libyan military leader Khalifa Haftar has ordered his forces to advance on Tripoli, seat of the internationally-recognised unity government. By Abdullah DOMA (AFP/File)

The UN Security Council will meet behind closed doors on Friday to discuss the situation in Libya after the leader of eastern forces in the war-scarred north African country ordered his troops to advance on Tripoli.

Britain requested the urgent meeting on Thursday, diplomats said, following the order from Khalifa Haftar, a key player opposed to the government in the capital.

Haftar's forces announced Wednesday they were gearing up for an offensive in the west of the country to purge it of "terrorists and mercenaries," having seized key areas of the country's south since the start of the year.

"The time has come," Haftar said in an audio message released Thursday by his self-proclaimed Libyan National Army, pledging to spare civilians and "state institutions."

The spike in tensions came as Secretary-General Antonio Guterres was making his first visit as UN chief to Libya ahead of a planned conference later this month aimed at charting a course toward elections.

"I am deeply concerned by the military movement taking place in Libya and the risk of confrontation," Guterres tweeted.

The United States and its allies issued a joint statement urging "all parties to immediately de-escalate tensions."

"Our governments oppose any military action in Libya and will hold accountable any Libyan faction that precipitates further civil conflict," said the US, France, Britain, Italy and the United Arab Emirates.

Elections in Libya are meant to turn the page on years of chaos following the 2011 overthrow of Moamer Kadhafi that has seen a bitter rivalry emerge between two governments scrambling for control in the oil-rich country.