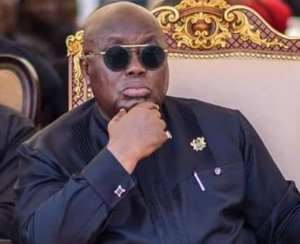 The NPP fears to hear corruption prosecution more than any political party I know. We said the NDC, under the Mills-Mahama administration, created, looted and shared among cronies whose umbilical cord were strongly tied to corruption. Our rants played a keen role in taking the alleged corrupt government out of power. Interestingly, almost 3yrs into power, the party that claimed incorruptibility but yelled in promise would send the corrupt officials into prison have done a Log1 or Cos90 job on their promise. Pathetic, isn't it?

Even more interesting is seeing and hearing the alleged corrupt NDC officials daring Government, the Attorney General and the "Lazily Sleepy" Special Prosecutor to prosecute them before a competent court of judicature on any corruption charges if they have any. The government and his legal machinery, purposely set up to fight the damning canker of corruption have failed in all ways.

All of a sudden, a man, who, for his constant unending "thuggery" against his own jointly birthed party, the NDC acquired for himself an admiration and title "Citizen Vigilante" has gone silent. Wow! Sometimes, pondering over what it means when the Ghanaian student politician calls "Tie down", I feel the appropriate relation we could make in trying to understand the concept "tie down" is the Mr. Martin Amidu's appointment into office as the state's special prosecutor. In fact, he has virtually lost his integrity and is gradually becoming an outright disappointment to the Ghanaian populates who bought into the idea of that office. Hey! Any attempt he makes to resign shall be in bad fate. Resignation is not and should not be part of his plans.

Taking off the political affiliative lens, my NPP government, in about the third year in political office has failed in the fight against corruption. I'm particularly not astounded therefore by the call of some party men calling for Anas' head and most on the call for Anas Aremeyaw Anas to provide a raw unedited video on the "Galamsey Fraud". This same Anas, who's been put in the place of Christ as we campaign to free Barabas was once our "Hero". Time indeed changes but this change has been too early and porous in terms of the fight against corruption. Things have fallen apart.

Before I go back to sleep, I think it won't be bad to announce and call the attention of the Vice President, I mean the Economic Messiah, I mean the Mighty Man of Valour, yes the David of Ghana who slew the Dollar in his day-to-day organised public lectures, I mean the handsome young exuberant Politician who became a police officer to arrest the cedi some years ago, yes, our own H.E Dr. Alhaji Muhammadu Bawumia that the once arrested Cedi has escaped from prison and is far ahead in the sprinting race with the Dollar. Just maybe he's not aware so we may have to call his attention to that. Sir, please rearrest the Cedi and allign it to the peaceful Dollar. But, on the sudden mysterious power outages, it's far too early to crucify PDS.