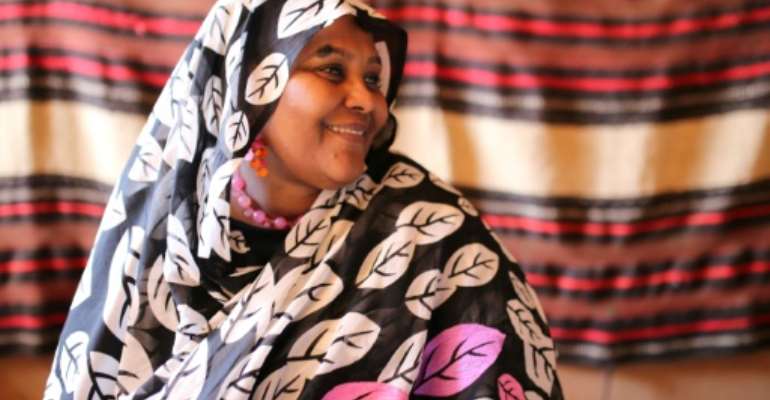 Mariam al-Mahdi, the deputy leader of Sudan's opposition Umma party, talks to an AFP journalist in this file picture taken on January 3, 2016. By TOM LITTLE (AFP/File)

Bashir appointed Eila as premier last month after dissolving the previous federal government in the face of the demonstrations.

Eila's cabinet is the third such government formed in less than two years, with the previous two administrations also sacked by Bashir for failing to revive the country's dilapidated economy.

Bashir on February 22 dissolved the former cabinet along with all provincial governments as he imposed a nationwide state of emergency to quell demonstrations after an initial crackdown failed to suppress the protest movement.

"We recognise the main issues, the issues of bread and oil, that need to be solved," Eila told reporters as he announced the names of his ministers.

The new cabinet, which also includes 18 ministers of state, is to be sworn in on Thursday.

Sudanese protesters burn tyres during an anti-government demonstration on January 18, 2019 in the capital Khartoum. By - (AFP/File)

Protests initially erupted on December 19 after a government decision to triple the price of bread, while irregular fuel supplies have been a common feature for months across the east African country.

"The economic issues need to be solved immediately as it impacts inflation and our exchange rate," said Eila.

"Prices of food items like bread, milk and meat increased in February, while that of vegetables fell," the agency said in a statement.

Although the bread price rise triggered the protests, anger had mounted across the country for years over soaring inflation.

The crisis was worsened by a lack of foreign currency after the secession of the south in 2011 took away the bulk of oil earnings.

Protests sparked by economic hardships have rocked Sudan since December. By - (AFP/File)

Protesters accuse Bashir's administration of mismanaging the economy, while the leader has blamed the United States for the crisis.

Washington lifted a two-decade trade embargo in October 2017, but an expected recovery has failed to materialise.

Officials say 31 people have died in the protest-related violence so far, but Human Rights Watch has put the death toll at 51 including children and medics.

The protest movement was initially spearheaded by the Sudanese Professionals Association, but soon several political parties threw their weight behind it.

She had been sentenced to jail for a week on Sunday by an emergency court after security agents arrested her while she was taking part in a march to challenge the state of emergency.

"The appeals court freed Mariam and she is now at home," her sister Rabah told AFP.

Bashir swept to power in an Islamist-backed coup in 1989 after toppling the then government of Sadiq al-Mahdi, the chief of National Umma Party and father of the two sisters.

The Islamist Popular Congress Party, a key ally of Bashir's administration, reiterated that the deaths of "martyrs" need to be investigated.

"If our judiciary does not perform its role seriously... then there could be interventions from UN Security Council and rights council and we will support their decisions," the party's general secretary Ali al-Haj told reporters.

"Violating human rights is simply unacceptable to us," he said, adding that his party was also against the state of emergency imposed by Bashir.

On Monday, Sudan's parliament approved a six-month state of emergency instead of one year as declared by Bashir.