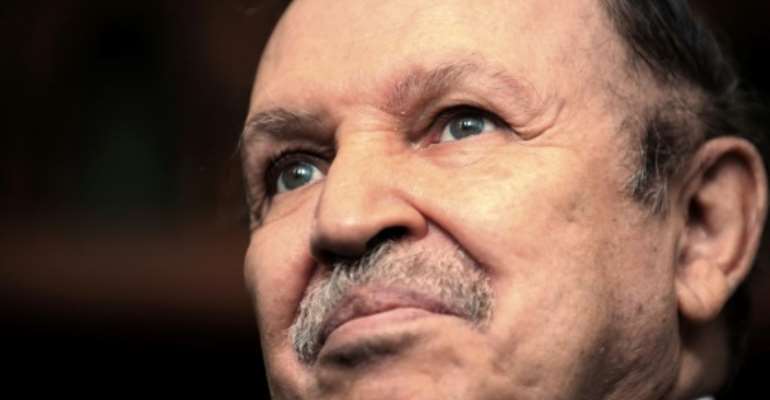 Abdelaziz Bouteflika, who on Monday announced he is pulling out of a bid for a fifth term, is Algeria's longest-serving president and a veteran of the independence struggle who held on to power during years of ill health.

His presidency survived the Arab Spring uprisings that toppled other leaders in the region.

But Bouteflika's bid this year for a fifth term in office sparked public anger and brought tens of thousands onto the streets demanding he step down after two decades in power.

Dubbed Boutef by Algerians, he had helped foster peace after a decade-long civil war in the 1990s.

Bouteflika has had a history of medical problems and often flew to France or Switzerland for treatment.

A stroke in 2013 affected his mobility and speech, and he has used a wheelchair ever since.

Known for his three-piece suit even in the stifling heat, Bouteflika is respected by many for his role in ending the 1990s civil war, which official figures say killed nearly 200,000 people.

But he has also faced criticism from rights groups and opponents who accuse him of being authoritarian.

Algeria's Abdelaziz Bouteflika came to power in 1999 with the support of an army battling Islamist guerrillas. By FAYEZ NURELDINE (AFP/File)

In early 2016, he dissolved the all-powerful DRS intelligence agency after dismissing its previously immovable leader General Mohamed Mediene, better known as Toufik, after a quarter century in the post.

Abdelaziz Bouteflika, shown here in 1973, served as Algerian foreign minister for more than a decade. By - (AFP/File)

Abdelaziz Bouteflika casts his ballot on 16 September 1999 in Algiers. By HAMID (AFP/File)

Out of public eye

Fidel Castro and Abdelaziz Bouteflika attend a ceremony in Havana, Cuba on April 15, 2000 during an official visit by the Algerian president. By ADALBERTO ROQUE (AFP/File)

Abdelaziz Bouteflika is pushed in a wheelchair next to his nephew before casting his ballot at a polling station in Algiers while running for re-election on April 17, 2014. By FAROUK BATICHE (AFP/File)

But it was Bouteflika's bid for a fifth term in elections due to be held in April that proved the last straw for many Algerians.

His pledge not to serve a full term if re-elected failed to quell public anger and protests continued as his office announced his return from Geneva a week later.

He finally announced his decision to withdraw his candidacy on Monday, saying he was responding to "a pressing demand that you have been numerous in making to me".

Bouteflika's tenure has been overshadowed by the bloody repression of protests in the Kabylie region in spring 2001 and corruption scandals, while major challenges remain, including regular jihadist attacks.

"Bouteflika failed to turn Algeria into a modern country, with real institutions," according to Myriam Ait-Aoudia, a professor of political science.

Demonstrate diligence and honesty in your work – Outgoing KM...
17 minutes ago