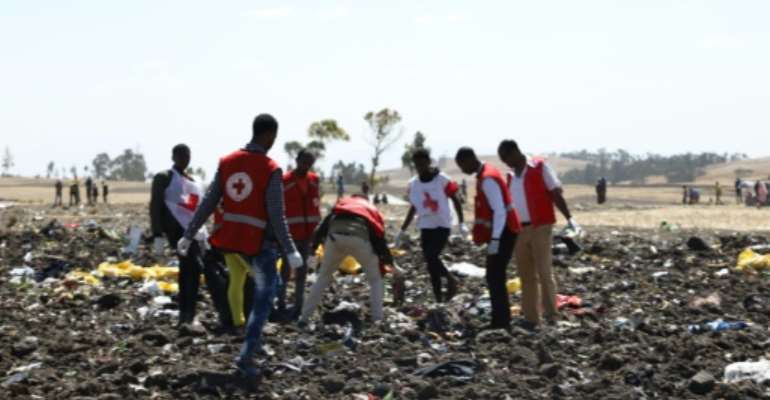 Red Cross teams work through the debris of an Ethiopian Airlines plane which crashed shortly after take-off from Addis Ababa, killing all 157 on board. By Michael TEWELDE (AFP)

Ethiopia will observe a national day of mourning Monday as investigators search for bodies and clues into the crash of a Nairobi-bound Boeing minutes after takeoff from Addis Ababa, killing all 157 people on board.

Ethiopian Airlines said it will work with Boeing, the national civil aviation authority and international experts in trying to unravel what caused the brand new plane to come down just six minutes into its flight.

Eight crew and 149 passengers from 35 countries perished when Flight ET 302 ploughed into a field near Tulu Fara village outside the town of Bishoftu, some 60 kilometres (40 miles) southeast of Addis Ababa.

A witness told AFP Sunday the plane came down in flames.

Locator map and death toll by nationality of passengers on the Ethiopian Airlines plane which crashed near Bishoftu in Ethiopia Sunday killing all 157 people on board.. By Jonathan WALTER (AFP)

"The plane was already on fire when it crashed to the ground. The crash caused a big explosion," Tegegn Dechasa recounted at the site, littered with passenger belongings, human remains, and airplane parts around a massive crater at the point of impact.

A local farmer, Sisay Gemechu, said: "The plane seemed to be aiming to land at a nearby level open field, but crashed before reaching there."

The dead included tourists, business travellers and 19 members of UN-affiliated organisations, many of whom were heading to the annual assembly of the UN Environment Programme in Nairobi. By Michael TEWELDE (AFP)

Among the dead were tourists, business travellers, and UN staff, including some who worked for the World Food Programme, the UN refugee agency (UNHCR) and the international Organization for Migration.

The IOM said in a statement early indications were that 19 staff members of UN-affiliated organisations perished in the crash.

Many were headed for an annual assembly of the UN Environment Programme, which opens in Nairobi Monday with some 4,700 heads of state, ministers, business leaders, senior UN officials and civil society representatives.

Ethiopian Airlines, the continent's biggest carrier, said "the search will continue in the morning".

"A committee comprising of Ethiopian Airlines, Ethiopian Civil Aviation Authority and Ethiopian Transport Authority has been set up to carry out the investigations," it added.

The scene of devastation where the Nairobi-bound Ethiopian Airlines plane came down. By Michael TEWELDE (AFP)

"Once the... deceased are identified, their bodies will be delivered to their families and loved ones."

The US National Transportation Safety Board said it would send investigators to assist, and Canada, which lost 18 citizens, said consular officials were "immediately deployed" to Addis Ababa to determine the facts.

Ethiopia's parliament declared a national day of mourning for Monday amid a global stream of condolences.

"Deeply saddened by the news this morning of the plane crash in Ethiopia, claiming the lives of all on board," tweeted UN Secretary General Antonio Guterres.

Slovak MP Anton Hrnko was among the bereaved.

Plane crashes around the world since 2009, according to AFP data.. By (AFP)

"It is with deep sorrow that I announce that my dear wife, Blanka, son Martin and daughter Michala, died in the air disaster in Addis Ababa this morning," he wrote on Facebook.

The Boeing 737-800MAX was new, delivered to state-owned Ethiopian Airways on November 15, the carrier said.

The plane is the same type as the Indonesian Lion Air jet that crashed in October, 13 minutes after takeoff from Jakarta, killing all 189 people on board.

Ethiopian Airlines said the plane had taken off at 8:38 am (0538 GMT) Sunday from Bole International Airport and "lost contact" six minutes later.

According to the airline, Kenya had the largest number of casualties with 32, followed by Canada with 18, Ethiopia nine, then Italy, China, and the United States with eight each.

Ethiopian Airlines says it will work with Boeing, the national civil aviation authority and international experts in trying to unravel what caused the brand new plane to come down just six minutes into its flight. By Michael TEWELDE (AFP)

Britain and France each had seven people on board, Egypt six, and Germany five -- though the breakdown was not final.

Canadian Prime Minister Justin Trudeau and his British counterpart Theresa May both described the news as "devastating".

Ethiopian Airlines CEO Tewolde GebreMariam said the plane had flown in from Johannesburg earlier Sunday, spent three hours in Addis and was "despatched with no remark", meaning no problems were flagged.

Asked if the pilot had made a distress call, the CEO said "the pilot mentioned that he had difficulties and he wants to return. He was given clearance" to turn around.