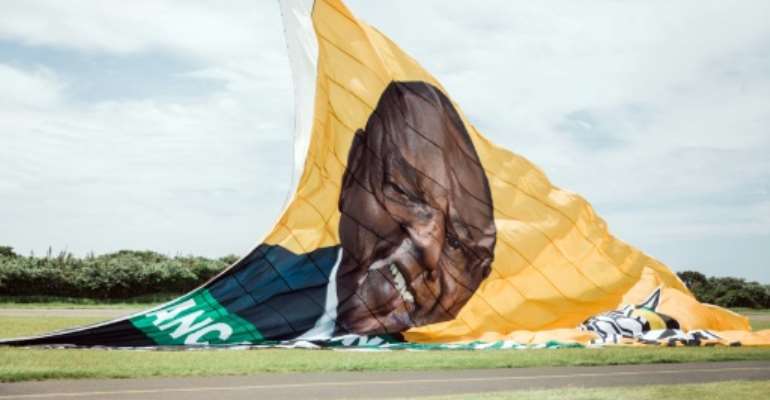 On the up: The ANC hoisted a giant New Year's banner bearing the face of Cyril Ramaphosa, credited with reviving party fortunes after the scandal-hit era of Jacob Zuma. By RAJESH JANTILAL (AFP)

South African President Cyril Ramaphosa unveils the ANC's election manifesto on Saturday with pledges to transform the economy and fight corruption as the ruling party tries to woo voters.

Ramaphosa is set to release details of the manifesto before tens of thousands of supporters in the eastern city of Durban, marking the start of four months of hectic campaigning.

The African National Congress (ANC), which has ruled since the end of apartheid 25 years ago, is tipped to win the election in May despite faltering support, internal divisions and a sluggish economy.

The party of Nelson Mandela suffered a slump in popularity under the scandal-ridden presidency of Jacob Zuma, who was ousted last February after nine years at the helm.

But a recent IPSOS survey predicted the ANC could garner as much as 61 percent in the national and provincial elections.

At the legislative level, that would put it on a par with its performance in 2014, when it picked up 62 percent. In South Africa's parliament, the party which holds a majority of seats also selects the president.

The forecast upswing is pinned on the appointment of moderate pro-business reformer Ramaphosa as president after ANC lawmakers forced Zuma to resign as corruption scandals piled up.

In an address earlier this week marking 107 years since the party was founded, Ramaphosa admitted that in "recent times, our movement has fallen short of our people's expectations".

And at a dinner on Friday night he said some South Africans "tell harrowing stories about what has not changed" since the end of apartheid in 1994.

"Our manifesto is a coherent and bold plan for a better life for all, addressing the persistent realities of unemployment, poverty and inequality," he said.

The ANC now has a clear plan to boost the economy, create jobs and reduce inequality, he said.

"We will step up the fight against corruption throughout society and safeguard the integrity of the state".

Tens of thousands of party activists dressed mostly in yellow party colours converged at the 85,000-seater soccer stadium in the coastal city of Durban for the launch of the manifesto where they danced to music.

In a noisy and colourful display, dozens of motorbike riders flying ANC flags, circled the pitch - revving up their bikes to chants and applause from supporters on the terraces.

Senior party officials have this week fanned out across the surrounding Kwa-Zulu Natal province, spreading the message of a revived and unified party.

"We are confident that this manifesto will lead to the renewal of the mandate of the ANC to govern," ANC Secretary General Ace Magashule told reporters.

"The unity is there. It is visible."

Ramaphosa has publicly tried to mend ties, sitting next to Zuma and praising him at party events.

In policy terms, the manifesto is set to underline the ANC's commitment to land reform to tackle racial inequality -- setting the stage for one of the election's fiercest battlegrounds.

One of Ramaphosa's flagship pledges is to change the constitution to allow land to be taken from minority white owners without compensation -- a plan aimed at attracting landless black voters but that has alarmed many foreign investors. 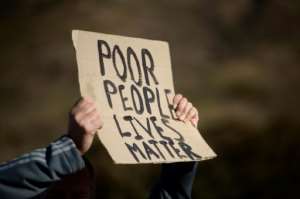 The South African economy is forecast to have grown just 0.7 percent last year, with unemployment remaining at record highs of over 27 percent.

The ANC will face the main opposition Democratic Alliance and the radical leftist Economic Freedom Fighters party in the election.

Both parties hope to make gains due to the ANC's poor recent record and discontent over stark post-apartheid inequality.

But they have struggled to dent the ruling party since Zuma's fall.

Unemployed mother of six, Marriam Xobololo, 53, from the rural area of eNgcobo in the Eastern Cape province has voted for the ANC since 1994.

"When you join the ANC, it's like when you accept Christ in your heart. The ANC is just like Christ in my heart," she said as she waited for Ramaphosa to speak. "I will forever vote for ANC, and I will die and perish voting for the ANC. We are nothing without ANC".

Lungile Nogabe, a businessman who drove to Durban from the central city of Bloemfontein, said: "We lost support as our members were disappointed, especially by corruption. Now that we have a new president, you will see wonders."