Libya could vote on constitution in February: electoral commission 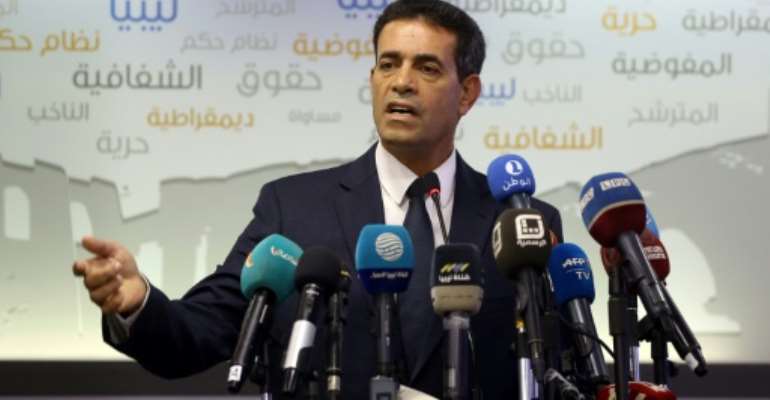 Imed al-Sayeh, head of Libya's electoral commission, speaks during a press conference in the capital Tripoli on December 6, 2018. By Mahmud TURKIA (AFP)

Libya's electoral commission could organise a referendum on a new constitution for the strife-torn country in February if it gets security guarantees and funds, its head said on Thursday.

"It is possible to organise a referendum on the constitution... towards the end of February," commission chief Imed al-Sayeh told a news conference.

He said the first hurdle was overcome when the parliament, based in the remote east of the country, approved in mid-September a law on the referendum.

Sayeh, who received the text of the law in November, said the legislation was a first step "even if it is incomplete and imperfect".

But in order to hold a referendum security guarantees -- which he said are a "major challenge" -- must be met and the commission also needs funds.

The commission is "in the red" and needs 40 million Libyan dinars (around $30 million) to organise the referendum, he added.

In May suicide bombers stormed the headquarters of the electoral commission in Tripoli, killing 14 people, including nine staff members, in an attack claimed by the Islamic State group.

Sayeh said that this "terrorist attack" also damaged infrastructure and equipment at the commission.

"Therefore a comprehensive security plan is necessary... because the security of our staff comes before anything else," he added.

A referendum on a new constitution for Libya should pave the way for much delayed legislative and presidential elections in the country.

Rival Libyan leaders had agreed to a Paris-brokered deal in May to hold a nationwide election by the end of the year.

But instability, territorial disputes and divisions in the oil-rich country have delayed plans for elections.

The United Nations is hoping the polls could help turn the page on years of the chaos in Libya that have followed the 2011 NATO-backed uprising that toppled and killed dictator Moamer Kadhafi.

But turmoil has continued in Libya with rival militias, tribes and jihadists vying for territory and the country's vast oil wealth.

And the country also remains divided between the UN-backed Government of National Accord (GNA) in Tripoli and an administration based in the east.

The electoral commission is considered to be one of the few credible and independent institutions in the country.

It organised legislative polls in 2012 and 2014, reviving voting in the country where it had been banned during Kadhafi's 42-year rule.