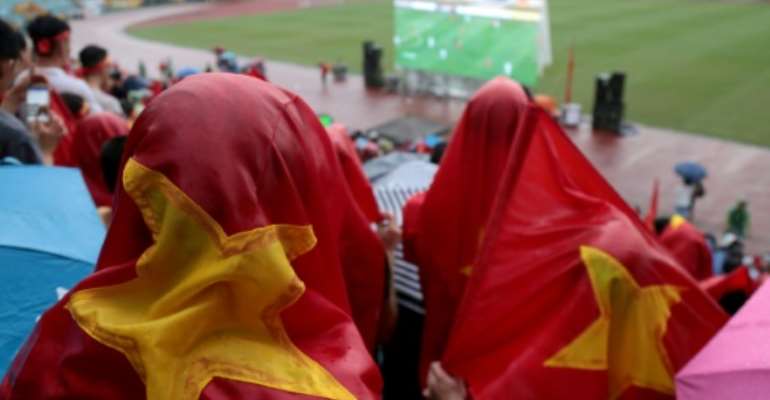 Vietnam has a long track record of jailing critics. By Nhac NGUYEN (AFP)

A Vietnamese blogger was sentenced to nearly three years in jail on Friday for smearing white paint on the national flag in the one-party communist country where defacing state symbols is deemed an egregious offence.

Huynh Thuc Vy, an outspoken activist who is eight weeks pregnant with her second child, has been under house arrest since August after she posted a photo of herself with the vandalised flag on her Facebook page.

She was sentenced to two years and nine months years in jail for "defacing the national flag" after a half-day trial in central Dak Lak province, she told AFP.

The maximum sentence for the crime was three years. The court said she can serve her sentence after her unborn child turns three to give her time to nurse, though her movemnts will be restricted.

"I am not surprised, I mentally prepared for this decision... they want to use this sentence to make me leave Vietnam," she told AFP.

But she said she would not be silenced.

"Nothing could change my mindset, my ambition or the work that I am doing," said Vy, whose father spent 10 years in jail for anti-state activity until 2002.

Vietnam has a long track record of jailing critics, but a hardline administration in charge since 2016 has intensified it chokehold on dissent.

Vy joins at least 55 activists convicted this year, according to an AFP tally.

A co-founder of the Vietnamese Women for Human Rights group, Vy won a Hellman/Hammett grant from Human Rights Watch in 2012 for her political writing on human rights.

The blogger from Vietnam's central highlands has been a vocal critic on a wide range of issues, from ethnic minority rights to a mass fish kill that decimated livelihoods in 2016, and a recent government proposal to install special economic zones in the country.

She has also spoken out about an incoming cybersecurity bill that requires internet companies like Facebook and Google to remove content deemed "toxic" by the government and hand over user data.

Rights groups say the law is aimed at scrubbing out online criticism from activists like Vy who use Facebook a crucial platform in the country where all media is state-controlled and protests are banned.

The controversial bill is set to come into effect in January and has been lambasted by the EU, the US and the UN, though Google and Facebook have not commented on it.

"What this sentence means is a young mother will be separated for years from her child simply for expressing views the government doesn't like," said Phil Robertson, HRW deputy Asia director.