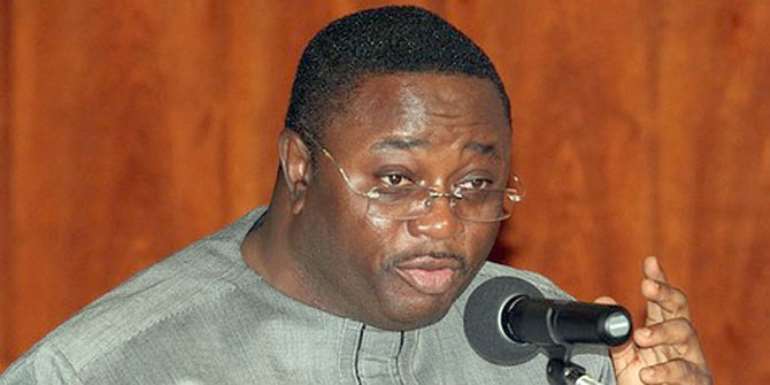 In 2013, Ghana was hit by one of the biggest corruption scandals ever recorded since it become a nation-state in 1957 and become a republic in 1960. It is considered the biggest in terms of the quantum of money and the personalities involved. The scandal involved the misapplication of public funds thereby dishonestly causing financial loss to the state. The corruption scandal came to be called the Ghana Youth Employment and Entrepreneurial Development Agency (GYEEDA) scandal.

GYEEDA, previously called the National Youth Employment Programme (NYEP), was set up in 2006 when the National Security Secretariat advised that youth employment had become a national security threat and that unless something urgent was done about it, there could be an explosion in the country.

With the usual fanfare and political propaganda, the youth employment programme was launched. It became one of the main achievements of the governing party at the time. When the government was changed two years later, the tussle over whose baby the programme was and who managed it better raged between the two main political deities in Ghana – the New Patriotic Party (NPP) and the National Democratic Congress (NDC). The NDC took over power from the NPP after winning the 2008 election and began managing the affairs of the nation from 7th January 2009.

The programme was rebranded, the name was changed from NYEP to GYEEDA. The government changed the uniforms of some beneficiaries of the programme and expanded the programme to benefit more people. New modules were created including Youth in Youth Enterprise and Shills Development Centres, Youth in Mining, Youth in dressmaking, Youth in Agriculture etc,

Many well-meaning Ghanaians began to habour the suspicion of corruption and misapplication of public funds with the GYEEDA programme which necessitated a public spirited investigation by a journalist with Joy FM. The investigation revealed in 2013 that the youth employment programme was a conduit for the political class and some political entrepreneurs to siphon state funds.

Between 2009 and 2012, about one billion Ghana cedis or nearly $500,000,000 was spent on GYEEDA (per the exchange rate at the time). The Joy FM investigation revealed that about 80% of the funds allocated for the programme went to private businesses and corrupt government officials while only 20% went to the youth in whose name the programme was created.

When the scandal broke in February 2013, it fell on the lap of Elvis Afriyie-Ankrah, the Minister of Youth and Sports at the time. That ministry supervised GYEEDA and signed all the major contracts of the programme.

On April 12, 2013, Mr. Afriyie-Ankrah inaugurated a five-member committee to probe and interrogate the issues revealed in the Joy FM investigations and suggest how to review the programme and rid it of corruption. He swore the government would not shield anybody found to have dipped his or her hands unlawfully into the state coffers using GYEEDA as the vehicle.

The committee finished its work and came out with more damning revelations. It recommended the cancellation of the contracts, refund of monies and prosecution of persons and companies found to have misappropriated funds. Again, Mr. Afriyie-Ankrah, the president of the republic and the government as a whole told the nation they were committed to cleaning the mess and dealing ruthlessly with whoever was involved in any wrong doing.

Some contracts were cancelled. Some monies were refunded. The head of GYEEDA, Abuga Pele, charged, prosecuted and later jailed 6 years for willfully causing financial loss to the state among other charges. A businessman, Phillip Assibit, was also jailed 12 years. The two were jailed on the same day in 2018.

For those who followed the scandal closely, the outcome was a way to manage public outrage and not to solve the problem of corruption or punish the main offenders. The main culprits were not touched. The ministers who signed the contracts which facilitated the corrupt practices were not charged then and have still not been charged. The bigger companies such as the Jospong Group of Companies, the AGAMS Group of Companies and the Zeera Group Companies, in whose favour the GYEEDA committee said dubious contracts were “heavily skewed”, have not been charged or asked to account for anything.

More than 200 million Ghana cedis wrongfully paid to these companies has not been retrieved. They were paid for work services not rendered. The most outrageous contract, the one with Zoomlion Ghana Limited has not been cancelled even though the committee recommended its discontinuation. Despite these glaring inactions and protection of individuals and companies against the interest of the state, Mr. Elvis Afriyie-Ankrah and the government argued that that was the best they could have done.

Five years after the GYEEDA scandal broke, however, Mr. Afriyie-Ankrah has come out with a shocking confession. Like a man conscripted and overpowered by unseen spirit, he told the nation that the so-called fight against corruption by governments (including the one in which he served) is a sham, a battle that is lost before political party wins an election. He spoke at a seminar at the Ghana School of Law and repeated it in an interview with Joy FM. Mr. Afriyie-Ankrah said the politicians and government officials had their hands tied because the persons and companies which were often caught in the web of corruption were the very ones that funded politicians and political parties.

Perhaps he may be confessing as to why the Jospong Group of Companies, the AGAMS Group of Companies and the Zeera Group Companies were not touch and predicting the current government’s inability to transparently investigate and prosecute anybody for the various BOST allegations that have made the news since they took office. It is because the individuals involved are said to be linked to financing the NPP’s political campaign in 2016.

“Why, you think we [political office holders] are foolish people?” he asked. “Why is it that sometimes you ask yourself that ‘which sensible person will sign this contract, or will agree to this deal?’ Haven’t you asked yourself that question? It is because our hands are tied.”

On Joy FM, on October 3, he repeated his position and went on to specifically mention the GYEEDA scandal as one of the difficulties he faced in dealing with businesses that funded politicians and political parties. He said the companies involved in GYEEDA sponsored both the NDC and NPP.

Why Elvis Afriyie-Ankrah’s confession cannot be dismissed is that he managed the campaign of the NDC in the December 2012 election and was rewarded with a ministerial appointment. And our elders say when a fish comes from the river to announce the death of the crocodile, you don’t doubt it. Elvis Afriyie-Ankrah sounded as if he was advising the nation when in fact he was making startling confession on why the GYEEDA scandal could not be dealt with thoroughly. He said it was because unseen hands interfered with the process.

“There are pressures [from] within and without because you are cutting off the source of funding for both parties [NDC, NPP] so they will come after you. So we have created a system that legitimizes and institutionalizes the corruption and then we say we want to deal with the corruption,” he explained.

Ghana is notorious for being the first to ratify treaties but not show any commitment to translating these treaties and convention into national legislative frameworks. One such commitment is the African Union Convention on Preventing and Combating Corruption. Chapter 10 of the Convention deals with the funding of political parties. The article states: “Each state party shall adopt legislative measures to

These two provisions are very much related. To be able to prohibit the use of “funds acquired through illegal and corrupt practices” to finance political parties, there ought to be “transparency in the funding of political parties.” If the source of the funds are not know, it will be impossible to determine whether those funds are clean or dirty. Ghana appears to incorporate it in its laws. Article 55 (14) of the 1992 Constitution of Ghana provides that “political parties shall be required by law:

The Ghana Political Parties Act also mandates political parties to file their annual accounts with the Electoral Commission. It further states that only citizens or companies owned by citizens are eligible to fund political parties.

The Act is silent on the sources of funding for the political parties. It emphasizes the nationality of the giver of the funds, and not the legitimacy or otherwise of the funds. Even with that, there has been any attempt by any state agency to check who gives to the parties. Over the years, anti-corruption civil society groups have called on both the Electoral Commission and the political parties to publish the accounts of the parties and disclose their sources of funding. These calls have not yielded any results.

In 2017, Citizen Ghana Movement, an anti-corruption and human rights pressure group, wrote to the Electoral Commission demanding copies of the political parties’ statements of accounts and details of funding the parties received prior to the 2016 election. When the Commission failed to comply, the group sued the Commission at the High Court and won. But to date, the EC is yet to comply with the judgment. This appears to confirm suspicions that there is nothing to show.

A member of the Citizen Ghana Movement and private Legal Practitioner, Mr. Kofi B. Bentil, is disappointed at the turn of events.

“We believe Political Party financing is a major root of corruption because the Parties have to pay financiers back by looking the other way when bad government contracts are signed, in effect we citizens suffer,” he said.

After a week of media discussion, Elvis Afriyie-Ankrah’s confession has been forgotten. When the headlines drowned, not many still know the Electoral Commission is yet to comply with the ruling of the high court to release information on political parties funding. Ghana has ratified the AU Convention but it is yet to put it into practice as far as transparency in the funding of political parties is concerned. With these lapses in law enforcement and the growing monetization of politics in the country, it appears the institutionalization of political corruption is being given roots to thrive. And civil society groups will have to work harder to compel state institutions to implement the existing laws while calling for better legislation to deal with the political party funding.

The writer, Manasseh Azure Awuni, is a journalist with Joy 99.7 FM. He is the author of two books, “Voice of Conscience” and “Letters to My Future Wife”. His email address is [email protected]