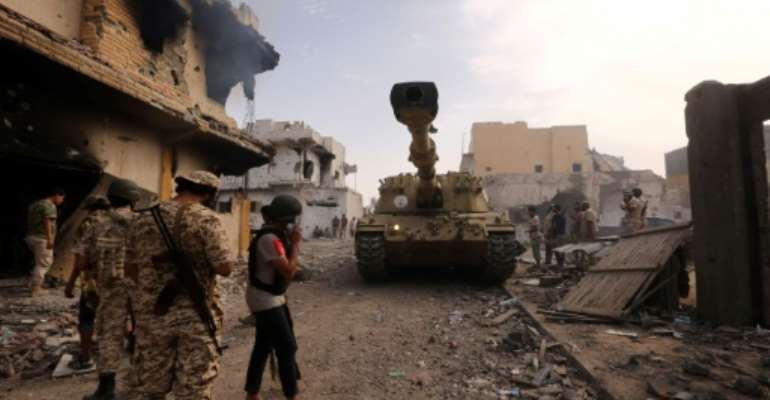 Forces loyal to Libya's UN-backed government gather in Sirte in October 2016, during their offensive to oust Islamic State group jihadists from the city. By MAHMUD TURKIA (AFP/File)

Emergency workers on Sunday uncovered another 35 bodies at a mass grave near Libya's Sirte, authorities said, taking to 110 the total number of remains retrieved from the site.

The municipal council in the former jihadist stronghold of Sirte initially said 75 bodies had been found in an agricultural area some 15 kilometres (less than 10 miles) west of the city.

On Sunday council spokesman Mohamad al-Amial said in total "110 bodies were uncovered in the mass grave" by the Libyan Red Crescent in the Al-Daheir area.

"Personal possessions and mobile phones were found next to the bodies," he added.

The first remains found at the site, also removed by the Red Crescent, are to undergo DNA testing by Libyan authorities.

"The prosecutor's office told us that it was difficult to identify the bodies therefore it will take time and DNA tests," Amial said.

When the municipal council first announced the discovery of the site on Wednesday, the spokesman said the bodies were believed to be Islamic State group members, although there was no confirmation.

IS jihadists overran Sirte in June 2015 and were ousted by forces loyal to Libya's UN-backed government in December 2016, after an eight-month battle.

The group has since pulled back to desert outposts, although it is still able to launch deadly attacks.

It claimed responsibility for a suicide attack last month on the Tripoli headquarters of Libya's National Oil Corporation that killed two staffers, as well as an assault in May on the country's electoral commission in which 14 people died.

In April, the government launched a military operation to track down the remaining IS members operating in western Libya. The US army meanwhile continues to launch strikes against jihadists, particularly in southern Libya.