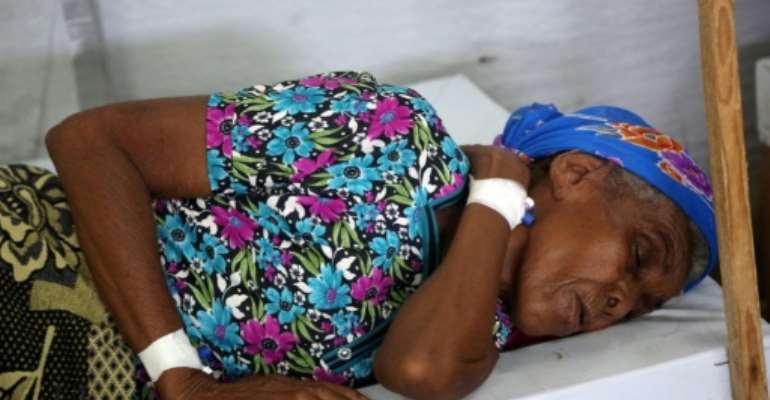 A woman is treated in the Yemeni coastal city of Hodeida, which has seen cases nearly triple in the past three months alone as conflict helps to spread the disease. By ABDO HYDER (AFP)

The World Health Organization said Tuesday it was helping Yemeni authorities with a second round of vaccination against cholera in three hard-hit districts, as cases surged across the war-ravaged country.

More than 2,500 people have died of the waterborne infection since the worst cholera outbreak in Yemen's history began in April 2017, while nearly one million more suspected cases have been reported across the country.

Children under the age of five make up nearly a third of all suspected cases.

Yemen's cholera epidemic had seemed to lull for a while, but WHO spokesman Tarik Jasarevic warned of a new escalation.

"We have been seeing the number of cholera cases increasing in Yemen since June, and this increase has been even more important in the last three weeks," he told reporters in Geneva.

During the first eight months of the year, Yemen registered nearly 155,000 suspected cholera cases, including 197 deaths.

But in the last week of August alone, 9,425 suspected cholera cases were recorded across the country, and just a week later, the number of suspected cases recorded soared to 11,478, WHO said.

WHO has warned Yemen faces a third cholera epidemic as autumn rains have increased the risk of infection after already being hit by two major cholera outbreaks in less than two years.

In a bid to prevent a "third wave", WHO, UNICEF and other partners began helping the government on September 30 to provide a second dose of the two-dose oral vaccination in three of the most vulnerable districts, he said.

In August, nearly 390,000 out of the more than 500,000 people targeted in Al-Hali and Al-Marawiah districts in Hodeida governorate and in Hazm Al Udayn in Ibb governorate received the first dose.

The three districts "were assessed to be most vulnerable to an escalation of cholera," Jasarevic said.

He said the same population would be targeted again, with the aim to vaccinate 540,000 people. Those who did not receive a first dose in August will need to get another dose down the line.

Cholera, which causes potentially deadly diarrhoea, is contracted by ingesting food or water contaminated with a bacterium carried in human faeces and spread through poor sanitation and dirty drinking water.

Left untreated, it can kill within hours.

Yemen's brutal conflict, which since 2015 has left some 10,000 people dead and eight million on the brink of famine, has created the perfect environment for cholera to thrive.

Save The Children warned Tuesday that Hodeida, the Yemeni port city on the front line between a pro-government alliance and rebels, had seen cases nearly triple in the past three months alone.