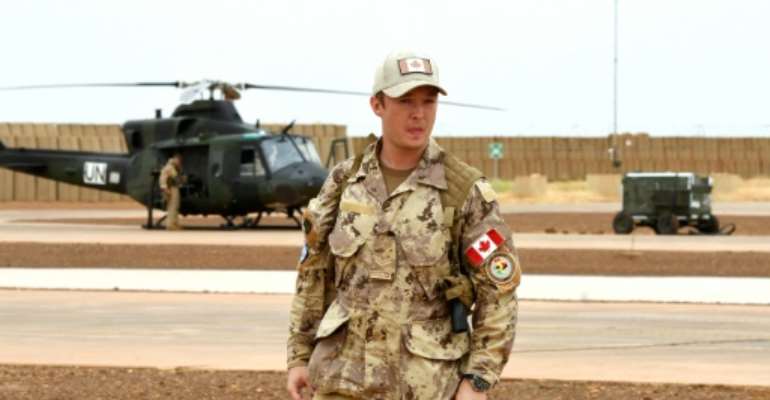 The Canadian forces will carry out medical evacuations in the north of Mali. By SEYLLOU (AFP)

The contingent of 250 soldiers and six helicopters is expected to conduct medical evacuations in the north of the country from Wednesday as they take over from German troops.

"My team and I are extremely proud to wear the blue beret as UN soldiers from Canada," Canadian commander Colonel Chris McKenna said at a ceremony at the UN base in Gao.

"It has been several years since Canada has had a large UN footprint and the pride that we take in hoisting the United Nations flag beside our beloved red-and-white Maple Leaf should not be underestimated," he said.

The Canadian troops, who are on a one-year mission, have been deployed since the start of July at Camp Castor, which also hosts German and Dutch troops.

While Canada originated the concept of peacekeepers in the 1950s, it has not deployed troops on UN peacekeeping missions for more than a decade. 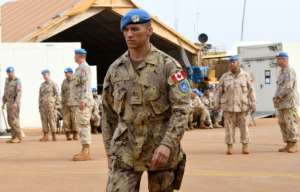 While Canada orginated the concept of peacekeepers in the 1950s, it has not deployed troops on UN peacekeeping missions for more than a decade. By SEYLLOU (AFP)

At the start of the year, the UN had only about 50 Canadian peacekeepers. The Malian mission also marks the return of the Canadian military to Africa for the first time since the Rwandan genocide in 1994, when Ottawa lead the UN mission there.

Islamist extremists linked to Al-Qaeda took control of the desert in northern Mali in early 2012, but were largely driven out in a French-led military operation launched in January 2013.

However large stretches of the country remain outside of the control of the Malian, French and UN forces, which are frequent targets of attacks.

"It's always a risk being in a dangerous place but we take security measures to protect our military, our citizens so that the risks are minimised," Canadian ambassador Louis Verret told AFP.

The UN mission, MINUSMA, deployed to Mali in 2013 in the wake of the French anti-jihadist operation and comprises some 14,000 military personnel and police.

It is currently the most deadly UN peacekeeping mission, having lost about 170 members including 104 killed in hostile acts -- more than half the UN soldiers killed during this period around the world.