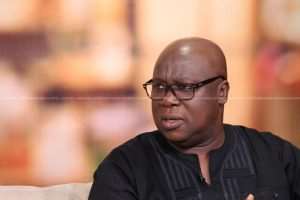 On Friday June 29 2018, the nation was shocked by the news of former Vice President, Paa Kwesi Amissah-Arthur’s sudden death.

He passed away during the early hours of Friday after he reportedly collapsed at the Airforce Gym in Accra during a workout session.

Ade Coker also narrated how his death occurred on the show.

An aide to the late Kwesi Amissah-Arthur who confirmed the death to Citi News said Amissah-Arthur collapsed at Airforce Gym on during a workout session and was rushed to the 37 Military Hospital.

He was survived by a wife and two children.
Many Ghanaians including former President John Mahama and President Akufo-Addo have expressed their condolences to the family of Mr. Amissah-Arthur while paying glowing tribute to the later, former Vice President.