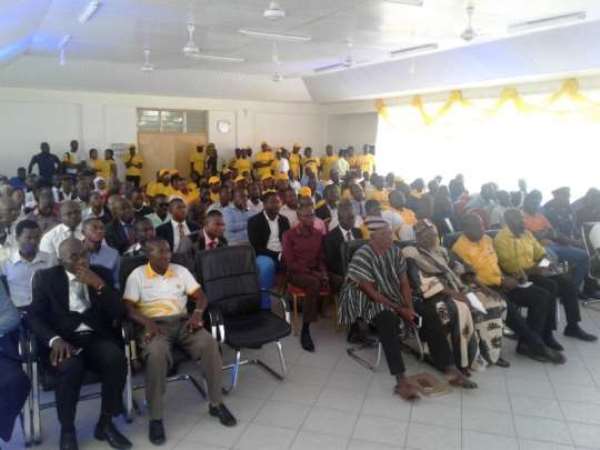 The Upper West Regional Minister, Alhaji Sulemana Alhassan, has commended MTN Ghana for being the major corporate tax payer in the telecommunication industry to reposition the country towards accelerated growth and development.

'This is an indication of a good corporate citizen playing a key role in the country's development,' he said.

The telecom giant has also been hailed for contributing significantly to the Ghana Investment Fund for telecommunications among others.

Alhaji Alhassan applauded MTN in a speech read on his behalf during the launch of the Company's Initial Public Offer (IPO) in Wa.

The IPO launch in Wa comes after the telecom company successfully unveiled similar platforms in Accra, Kumasi, Sunyani and Takoradi to pave way for public buying of the shares which began Tuesday 29th May, and projected to close on July 31, 2018.

In 2017, MTN recorded more than 200,000 retailers and significantly contributed to Ghana's job creation agenda through mobile money business, which had over 100,000 merchant points who received about GH¢ 226 million as commission.

Alhaji Alhassan lauded the Company for ensuring 35 percent of its shares were availed to Ghanaians as a key regulatory requirement for operating 4G technology.

'Agreeing to the terms of the 4G license conditions in itself shows your commitment to supporting the growth and expansion of the telecom industry and indeed the Ghanaian economy,' he said.

He said expansion of 4G nationwide has and would continue to unlock and accelerate the growth of an information and knowledge-based society whilst driving economic growth.

'I believe if we got more companies of your kind in Ghana we will see more growth in our economy than we are experiencing today,' he emphasized.

Through MTN mobile money, thousands of Ghanaians have been employed and millions now have convenient and safe access to mobile banking, which has bridged the gap between the banked and the unbanked.

The Minister described MTN's decision for including mobile money platform as a channel for buying the IPO as a brilliant idea, stressing that the move would make it a lot easier for people to invest in shares.

He said government recognizing the enormous benefit of ICT to the citizenry would continue to put in place structures and policies to help grow the telecom industry.

He said MTN after 22 years of operating in Ghana has become a good corporate citizen, playing a critical role in everyday life of Ghanaians.

Naa Fuseini Seidu Pelpuo IV, the Overlord of Waala Kingdom in a speech read on his behalf by Naa Osuman Dodi, Sunche Naa, was thankful to MTN for the support to the Sungsuma Women Group, Wa School for the Blind and refurbishing Gwollu Library as well as supporting traditional councils in the Region among others.

'Through these interventions, the company has demonstrated its commitment to the development of Ghana and the people of the Upper West Region in particular,' he said.

Mr Prince Sitsofe Boima, the Vice President of IC Securities (Ghana) Limited, advised the public investing in the shares to read the prospectus thoroughly and seek expert advice for clarity before making their final decisions of buying.