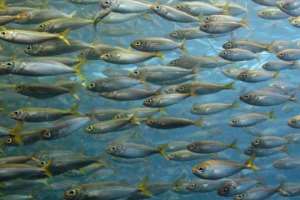 James Abiw has been fishing off Ghana's coast since the age of 11. Now at 45, he complains, there are too many boats at sea - 'everybody is fishing now'. He has a strong conviction that growing unemployment is the driving force behind this. 'There are no jobs and you do not need a university degree to fish; everyone is entering the trade.'

This has brought in its wake increasing decline in fish catches as fishing boats often return from sea empty. Abiw blames combined factors of poverty, subsidies and increased pressure on the diminishing fish stock. Lax enforcement of the rules and regulations governing the industry has also compounded the problem.

LIMITED RESOURCES, UNSUSTAINABLE PRACTICES
The Ghanaian artisanal or canoe fisheries sub-sector has been characterized by increased fishing intensity, dwindling stocks and catches over the past decades. According to the Coastal Resource Centre, between 1996 and 2011, catches fell by 66 per cent from 252,112 tons to 84,980 metric tons.

Experts attribute this to over-exploitation of marine resources together with inadequate enforcement of fisheries rules and regulations.

This decline in marine resources means lower harvests of small pelagic species by coastal fishing communities, something that threatens both their food security and incomes.

Government subsidies on premix fuel and outboard motors alongside other fishing gear have accelerated development of the sector - supporting and developing the local fishing industry, promoting sector growth, protecting employment and income in fishing communities.

To help bring down the high price of some selected equipment, for example, the government has absorbed about 40 per cent of the total cost - to give some relief to fishermen.

Fuel subsidies according to a 2016 report from the USAID/Ghana Sustainable Fisheries Management Project, amounted to about 70 per cent of the market cost of the fuel - costing the nation an annual average of about US$44.4 million.

The subsidies have kept rising, a development, that fisheries researchers warn is simply not sustainable.

Professor Rashid Sumaila, Director of the Fisheries Economics Research Unit at the Institute for the Oceans and Fisheries, University of British Columbia in Canada, noted in 2016, that in open access fisheries like Ghana, where over-capacity and over-exploitation already existed, maintaining fishing efforts by giving subsidies could only support unsustainable usage of fisheries resources and to deplete fish stocks. The provision of subsidy on fuel tends to be 'harmful and actually contributes to overfishing'.

Instead, Prof Sumaila emphasised the importance of conservation and enforcement of laws to protect vulnerable resources.

'I think we should be thinking of how we can redirect such monies to support sustainable use and the livelihoods of fishermen. 'This can be in the form of projects that are geared towards promoting conservation, research, monitoring and enforcement of fisheries laws and regulations.'

He encouraged the government to work closely with other West African coastal countries to stop the activities of foreign vessels.

DYING INDUSTRY?
In Axim, in the Nseman East Municipality of the Western Region, fishermen agree that subsidies are worsening the problem of overfishing. Their dilemma has been that completely removing them would bring untold hardship to their communities.

The chief fisherman, Nana Kofi Bentsil, expressed discomfort with what he said was the politicization of the fishing industry. 'Even fishing is politicized and depending on which side of the political aisle you belong, you are treated differently. This doesn't help.'

Rather than treating fisheries as a political issue, Nana Bentsil believes there should be strong engagement between fishermen, government and other stakeholders to provide workable solutions to problems bedevilling the fishing sector.

He wants the government to act boldly to ban illegal fishing in Ghanaian waters as it is doing with illegal mining - 'galamsey'.

The reality is that majority of fishermen and fishmongers in Axim are unhappy about the activities of the foreign vessels in our waters and would want to see the government take firm measures to stop their operations.

As the cycle of poverty, subsidies, lax enforcement and resource depletion continued, many in the artisanal fishing communities are unenthusiastic about their future.

Hannah Cudjoe, a fishmonger from Shama, has been in the business for more than 20 years and in her blunt assessment said 'it is not looking good'. She pointed to the negative impact the foreign fishing activity was having on women and said reduced catches had been having telling effect on them.

'The fishing industry is dying,' echoes Nana Ama Kampo, another fishmonger at Elmina, who like Madam Cudjoe, has been in the trade for decades. 'I wish no child of mine becomes a fisherman.' She advised against the use of chemicals to fish and light fishing. Fishermen should go back to the old ways of doing things.

Indiscriminate use of chemicals, explosives and light to increase fish catch is practised by both small and large scale fishermen - both foreign and domestic, and continues to hurt Ghana's valuable marine resources.

The eagerness to avoid the situation, where they would return from sea with no catch is pushing them into the unsustainable practice. The Axim chief fisherman like many others, believes that it should be up to fishing communities to come together to find a solution.

In the coastal community of Elmina, fisherman Nana Ekow Essuon, speaks of how the method of fishing had radically changed, in response to heightened competition for limited resources. 'This is a trade that we have learnt and for those who could not get access to education. Today, there is high level of unemployment in the country, so people who do not have skills are all going to sea.'

FORGING A SUSTAINABLE PATH
Kofi Agbogah, Fisheries Advisor to the USAID Sustainable Fisheries Management Project (SFMP), observes that fuel subsidies are leading to unsustainable levels of fishing activity. He holds the view that government would, however, find it difficult to remove these because of the fear of losing votes.

'They take the subsidized fuel and go to sea and come back with no catches. 'It's not just about giving subsidies we also have to question the boat entry system and to have this regulated.'

The way forward, Agbogah says, is to calibrate policies to regulate the depletion of the coastal resources, to protect them for future generations.

He suggests seasonal closure on fishing as the quickest way to sustain the fish stock. Protection for the fish during the spawning period, he notes, would allow for significant production of abundant offspring for the following year.

Hitherto, Tuesdays were considered sacred days and served as holidays for fishermen. It was therefore a taboo for any fisherman to go fishing on that day. The benefits of such practice were enormous as it allowed the fishes some break once every week to breed and replenish. Many fish stocks would have been saved if that practice had been respected and kept.

This seems not the case as foreign vessels would not be part of any such traditional belief.

The fishermen have applauded the initiative by the government to put in place a seasonal ban on the foreign vessels. They have also resolved to abide by the seasonal closure if it is for everybody - artisanal and the foreigners.

Although scrapping the subsidies would make things hard for fishermen, fisheries economics literature suggests that Ghana's fisheries sector would be better off without them.

The funds should instead be redirected to projects that promoted conservation, research, monitoring and enforcement of fisheries laws and regulations.

Expansion of economic opportunity for traditional fishing communities is also vital to ease the pressure on marine resources. It is important that priority effort is focused on providing fishing communities with alternative sources of livelihood. This could not wait.