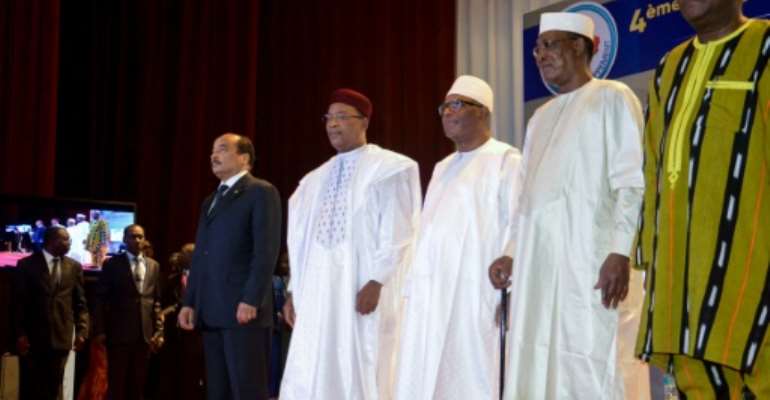 Five countries in the Sahel have made a pitch for further funds for a joint force to fight jihadism in their fragile region.

The presidents of Burkina Faso, Chad, Mali, Mauritania and Niger made the appeal after a summit Tuesday in the Niger capital of Niamey, ahead of a fund-raising meeting in Europe later this month.

"Given the pressure that the current security situation is placing on the public finances of member states, the heads of state invite the international financial institutions... to put in place additional resources to face it," their statement said.

The five countries, along with Nigeria and Cameroon, are at the brunt of jihadist attacks in west Africa that have left thousands dead, unleashed a humanitarian crisis and sapped economies that are already among the poorest in the world.

The goal is to have a pooled "G5 Sahel" force of 5,000 men by mid-2018 that would patrol hotspots and restore authority in lawless areas.

It would operate alongside France's 4,000 troops, deployed across the Sahel, and the UN's 12,000-strong MINUSMA peacekeeping operation in Mali.

This has provided support for two initial operations, which have taken place in the volatile "tri-border" area where the frontiers of Mali, Niger and Burkina Faso converge, and to set up a headquarters, located in Sevare, Mali.

On Sunday, Malian Defence Minister Tieman Hubert Coulibaly said the G5 force "will be operational by the end of March".

Funding, though, is needed for the force's longer-term future, including training and equipment. A new round of talks takes place in Brussels on February 23.