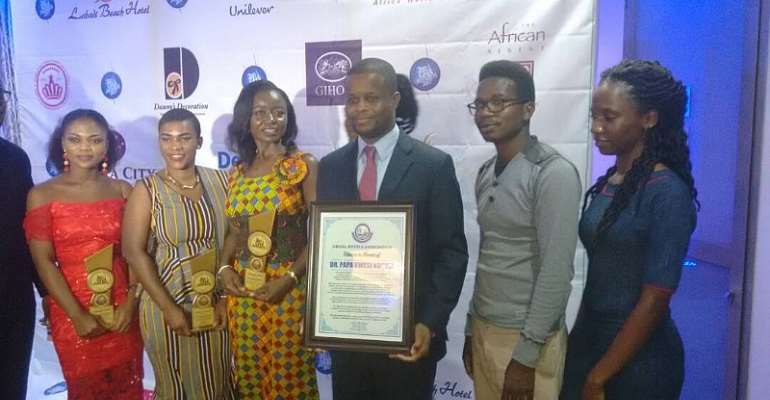 The hotel industry over the years has seen numerous improvement as well rebranding of old existing hotels to meet the international standard over the past few years.

One of such renovation hotels is Kempinski Gold Coast Hotel located in the heart of the capital city Accra.

This was showcased at the just ended 3rd Ghana Hotels Awards organised at another sterling hotel, Labadi Beach Hotel over the weekend.

Where it won the 5-star Hotel of the year after beating other competitors in the same category such as the Movenpick Ambassador Hotel and the Labadi Beach Hotel.

Other big winners on the night included the Coconut Grove Hotel,which won the House Keeping and Conference and Banqueting Team of the year, 2&3 star category whilst the Life Time Achievement of the year was won by the former Flagbearer of the Progressive Peoples Party (PPP) and Chairman of Groupe Nduom, Dr. Papa Kwesi Nduom.

Dr. Nduom won this award due to his immense contribution and building of hotels according to international standards through its chain of Hotels spanning across the length and breadth of the country.

The Volta Region was not left out of the awards for the Regional Branch of the year, went to the region as well Outstanding Contribution of the year went to Bob Coffie Dasu, owner of Freedom Hotel, located in Ho, Volta Region.

The most secured Hotel of the year went to Movenpick Hotel, Accra.

In his welcome address, the National President of the Association, Mr. Herbert Acquaye, noted that the awards night was instituted to reward hardworking Hotels and Personalities who have committed themselves in ensuring excellence in the industry as well ensuring healthy rivalry among industry players.

This year's awards was on the theme: Harnessing the Economic Potential of the Hotel Industry through Technology, innovation and cost reduction.

However, the President urged the government to create a conducive environment for the industry which will contribute to its development and growth as well boost the revenues and tourism.

Nana Kweku Nduom, Vice President, Business Development and Finance of the Groupe Nduom who represented the group as well his father at the night in an interview with the press attributed their success in the local market to consistency, excellent service delivery and being the only Ghanaian indigenous company owned and managed efficiently by Ghanaians.

He reiterated that the Groupe Nduom would continue to offer its support to the Hotel industry in Ghana so that the sector can absorb the teaming number of youths, a way of reducing unemployment and to help make Ghana one of the best tourist destination in the world.

The Chairman of the event, Hudson Kojo Ablordepey,who won the Life Time Achievement of the year,2016 at the 2nd Ghana Hotel Association Awards chastised government for keeping to Laws which were abolished in the United Kingdom such as the Spirit Ordinance Amendment Act 1928 and calls on the government to review laws such as the Legislative Instrument 1205, EPA Law 206 and Act 462,1993 which, he said is inhibiting the growth of the Hotel industry in Ghana.