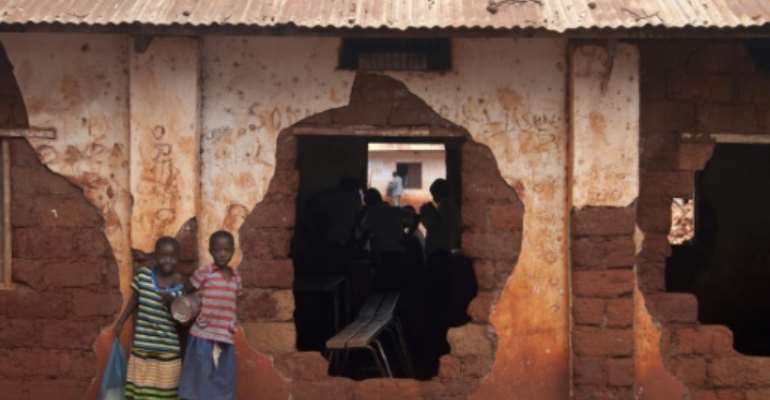 Burundi's political crisis, which began in 2015, has forced more than 410,000 people into exile. By ERIN BYRNES (AFP/File)

Burundian refugees living in a transit camp in the Democratic Republic of Congo on Saturday complained of a lack of humanitarian support after their refusal to register on a biometric database, claiming it would violate their religion.

"We've had no more assistance from humanitarian organisations since January 1, 2018, still less from the (UN) High Commissioner for Refugees (UNHCR)," spokeswoman for the group Francoise Ndayisenga told AFP.

The refugees belong to an obscure Catholic sect that follows a female prophet called Zebiya, who claims to have had several visions of the Virgin Mary in north Burundi, and say they fled their homeland amid religious persecution.

They are now stuck in the transit camp in the South Kivu region which borders Burundi.

A local representative for DR Congo's national refugee commission, Augustin Bulimuntu, told AFP that the group were no longer receiving assistance but did not say why.

Regional UNHCR administrator Andreas Kirchhof told AFP that his organisation had offered "individual interviews" to the refugees while deploring a "lack of cooperation" with the authorities who are responsible for according refugee status.

"We are not going to accept this (database) registration in spite of the difficult existence they want to impose on us as our beliefs forbid it," insisted Ndayisenga.

"In order to survive we have to sell what few items we have to local people, such as kitchen utensils, clothes, radios and televisions -- even livestock products," said Ndayisenga.

The group of some 2,000 people fled over the border in 2015 to Kamanyola, accusing Burundian police of firing on them in the northern town of Businde.

In September, at least 36 Burundian refugees were killed by Congolese soldiers during a protest at Kamanyola camp which is administered by the UN's mission in DR Congo.

Most of them were members of the Zebiya, witnesses told AFP.

At the time, Kinshasa insisted it was dealing with an "armed group" which had infiltrated the refugees.

The UNHCR responded to that crisis by providing "exceptional humanitarian assistance," Kirchhof noted, while adding that "sadly, we cannot continue doing that."