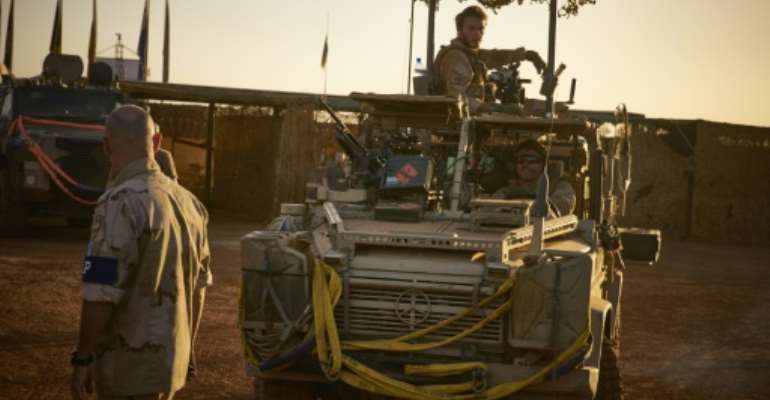 Dutch soldiers, shown here at their base in Gao, Mali, are among nearly 11,000 peacekeepers in MINUSMA, the United Nations Multidimensional Integrated Stabilization Mission in Mali. By MICHELE CATTANI (AFP/File)

The Security Council on Friday unanimously adopted a resolution authorizing UN peacekeepers in Mali to provide logistical and operational support to the new G5 Sahel anti-jihadist force there.

The resolution, drafted by France, was the subject of tough negotiations with the United States, which had opposed any UN involvement in the force made up of troops provided by Burkina Faso, Chad, Mali, Mauritania and Niger.

"The dialogue has been frank, constructive and I believe productive," French envoy Francois Delattre said of discussions with his American counterpart Nikki Haley.

Haley noted the "creativity" of the text, stressing that the United States is committed to supporting African countries in their fight against terrorism.

The UN's mission in Mali, which has some 10,000 peacekeepers, would provide medical evacuations, fuel, water, rations, and engineering units to assist the G5 Sahel troops.

The G5 force conducted its first operation last month in the Sahel region, which has turned into a hotbed of lawlessness since chaos engulfed Libya in 2011, Islamists took over northern Mali in 2012, and the Boko Haram group became active in northern Nigeria.

To overcome US reluctance in assisting the new African force as Washington seeks to cut its spending on UN programs, the resolution adopted Friday provides for a European Union-coordinated funding mechanism that will reimburse the UN for all expenses related to the G5 Sahel force.