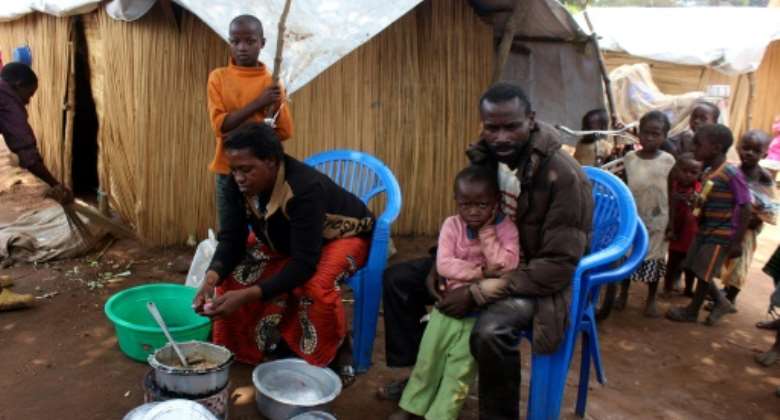 Refugees from the Democratic Republic of Congo at the Kenani transit camp in Zambia, the neighbouring country where the UN says more than 12,000 people have fled to.. By OBERT SIMWANZA (AFP)

More than 12,000 people fleeing violence in the Democratic Republic of Congo have poured into Zambia this year, the United Nations said Friday, warning that aid operations there were "hugely underfunded".

DR Congo's huge eastern region has long been wracked by violence, but fighting between government soldiers and militia groups, as well as inter-ethnic clashes, has increased significantly in 2017.

The UN refugee agency warned that the unrest was causing a growing influx of people seeking safety in neighbouring Zambia.

"The number of refugees fleeing militia violence in south-eastern Democratic Republic of the Congo and arriving in Zambia has crossed the 12,000 mark, with more than 8,400 arrivals in the last three months," UNHCR spokesman Babar Baloch told reporters in Geneva.

He said that around 80 percent of the new refugees were women and children, and that most were coming from DR Congo's provinces of Haut-Katanga and Tanganyika.

The refugees have been "driven out by the extreme brutality of rampaging militias, with reports of civilians being killed, women being raped, private property looted and houses torched," he said.

Many refugees had warned that fighting on the ground was intensifying and that even more people would likely flee the conflict-torn region, Baloch said, pointing out that 4.1 million people remain displaced inside DR Congo.

Baloch cautioned that Zambia's Kenani Transit Centre was currently hosting more than 8,000 refugees, and was filled to maximum capacity.

He said that Zambia has made more land available for a new site, but that UNHCR and its partners were "in urgent need of resources to develop the new site".

They also needed more funds to help provide refugees with life-saving assistance, including food, shelter, water and sanitation and access to health services, he said.

Less than a quarter of the $236.2 million required to provide aid to refugees, internally displaced people and others in DR Congo this year has so far materialised, while only $13.6 million of the $54.6 million needed in Zambia has been received, UNHCR said.

Zambia currently hosts a total of 33,000 refugees from DR Congo, according to UN numbers.

We can't wait any longer – CLOGSAG to embark on nationwide s...
40 minutes ago

Nat Nuno Amarteifio, former Mayor of Accra to be buried on F...
40 minutes ago