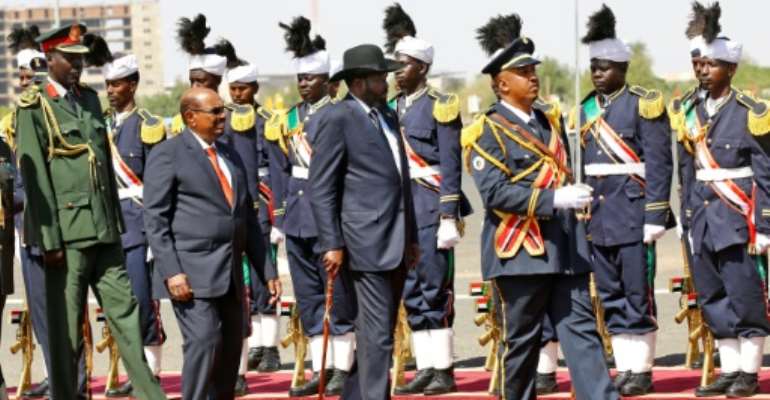 It is Kiir's third visit to Khartoum since the Christian majority south split from the Muslim north in 2011 after a 22-year civil war that killed hundreds of thousands.

"This visit is aimed at normalising the relations between the two countries which have been tense," South Sudanese Information Minister Michael Makuei told reporters, adding the two leaders will decide on a roadmap to improve bilateral ties.

"The two countries should cooperate in the interests of their people as they are all one people in two countries."

His Sudanese counterpart Ahmed Bilal said the visit aims to "establish security and stability in the two countries".

Officials say Kiir will hold talks with Bashir and other senior Sudanese officials to thrash out several unresolved issues between the two countries.

Border rows, economic issues such as Juba's payments for the use of an oil export pipeline through Sudan and building a buffer zone along the frontier are among the expected topics of discussions when the two leaders meet.

Officials will also attempt to address tensions over alleged support for insurgents.

Sudan has regularly accused its neighbour of aiding rebels in its war-torn Darfur, Blue Nile and South Kordofan regions.

Tens of thousands of people have died in South Sudan and millions more have been driven from their homes since the war erupted in the world's youngest country in December 2013.

More than 450,000 South Sudanese refugees have poured into Sudan since the war broke out, the United Nations says. Khartoum estimates they number 1.3 million.

A South Sudanese delegation of senior officials had already arrived in Khartoum a few days earlier for preliminary meetings ahead of Kiir's arrival.