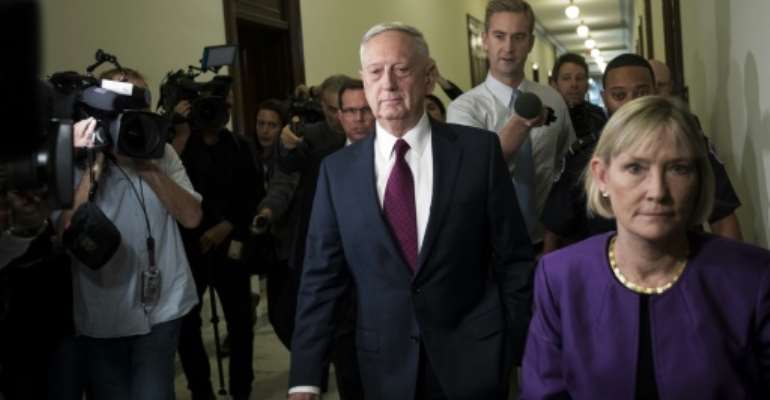 US Defense Secretary Jim Mattis met with Senators John McCain and Lindsey Graham after the Republican lawmakers expressed frustration about the lack of details of an ambush in Niger that left four US soldiers dead. By Drew Angerer (GETTY IMAGES NORTH AMERICA/AFP)

Washington (AFP) - Defense Secretary Jim Mattis visited Congress on Friday to assure Senator John McCain that lines of communication were open, amid demands the Pentagon reveal more about a Niger ambush that killed four US servicemen.

Tempers have flared in recent weeks between President Donald Trump's administration and lawmakers frustrated about the lack of clarity regarding the clash with suspected jihadists in an area where an Islamic State group affiliate operates.

McCain, who chairs the Senate Armed Services Committee, has repeatedly called for details from the Pentagon about the ambush, including why the body of one slain soldier was not immediately evacuated.

"I felt that we were not getting sufficient amount of information and we are clearing a lot of that up now," McCain, standing alongside Mattis at the senator's congressional office, told reporters after their closed-door meeting.

"We can always improve on communication, and that's exactly what we'll do," Mattis said.

The McCain-Mattis meeting came as questions mounted in US media about what happened on October 4, and criticism over Trump's handling of the aftermath.

Mattis, a former US Marine general, said Thursday that the body of Sergeant La David Johnson was "found later" by non-US forces following the ambush.

The Pentagon has initiated an investigation into the deadly encounter.

"The president, the Department of Defense, and frankly the entire country and government want to know exactly what happened," White House spokeswoman Sarah Huckabee Sanders said.

"We won't rest until we get some answers," she added. "And when the time is appropriate, we'll talk about the details of the investigation."

The US military was not expecting hostile action when its troops came under attack as they conducted training operations with Nigerien forces.

It fell to French forces conducting anti-jihadist operations in the region to provide air support after the ambush.

On Thursday, Mattis made remarks about the deadly incident that signaled there were sensitivities about the circumstances.

"The US military does not leave its troops behind, and I would just ask that you not question the actions of the troops who were caught in the firefight and question whether or not they did everything they could in order to bring everyone out at once," Mattis said.

Trump has faced criticism for not immediately publicly addressing the attack, then falsely claiming Barack Obama and other former US leaders did not call the families of fallen soldiers.

The attack came less than a month after Trump placed travel restrictions on citizens from Chad, a Niger neighbor with extensive history of counterterrorism cooperation, entering the United States.

At the time of the ambush, Chad was in the midst of a monthslong withdrawal of hundreds of its troops from Niger, where they were part of the coalition fighting Boko Haram extremists.