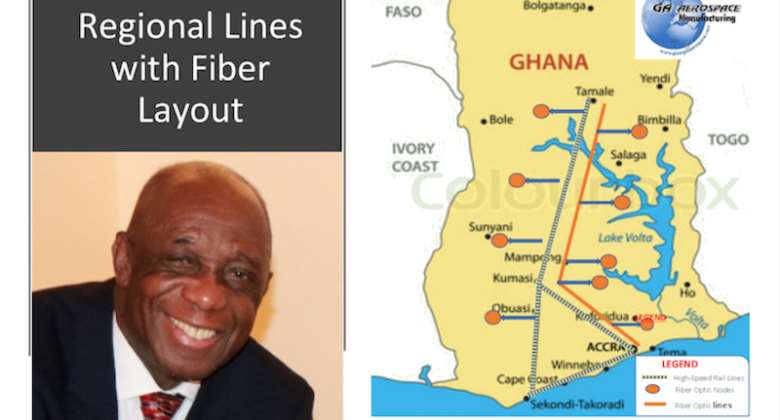 Dr. Thomas Mensah , one of the speakers at the very successful 2017 Ghana Diaspora Homecoming Summit (DHS) held from July 5-8., 2017 at the Accra International Conference Center has called on Ghana to develop a High-speed Rail System (HRS) to link two of the nation’s important port cities; Accra and Takoradi in the South, to Tamale passing through Kumasi.

President Akufo-Addo of Ghana launched the conference as its first presenter, he was followed by several leaders of government including cabinet ministers, a presentation was read on behalf of Vice President Dr. Mahamudu Bawumiah . There were other presenters of the Ghanaian Diaspora from countries like Great Britain, France, Germany, South Africa and the US which attracted 2000 participants.

World Infrastructure expert Dr. Mensah who presented at DHS via video conference from his Atlanta Georgia base in the US proposed during his presentation among other things, that China could be considered to build the HRS as Ghana is already negotiating a US $19B bauxite development deal that includes a smelting facility and a light rail system with them. Dr. Thomas Mensah has served on the US High-Speed Rail Board.

In a phone interview with TheAfricanDream.net, Dr. Mensah disclosed he believes that “a recent article in Moody’s disparaging the bauxite deal as excessive debt will not hold water if coupled to the High-Speed Rail System that can modernize the transportation infrastructure in the country” as proposed in his presentation at the DHS.

“The proposal is also in line with the current government ‘one factory, one district’ plan” said Dr. Mensah who felt his proposed HRS corridor from the south to north of the country can actually exceed this goal by having the potential to “creating 4 factories per district along the Rail route to supply to the construction and operation of the HRS. I see factories set up to build among other things plastic, and composites for the interior of the high-speed trains as well as possibly aluminum parts for the train itself” he explained.

“This proposal has the potential to create a major Technology Transfer to Ghana, with all its Universities participating by supplying engineering, science and other graduates for the future operation and maintenance of the HRS System“, according to Dr. Mensah. Ghana will be the third country in Africa after Ethiopia and Morocco to have HRS if Dr. Mensah’s proposal materializes and is implemented in Ghana. It will transform Ghana to a well-developed country with value-added export capabilities.

As part of his presentation, Dr. Mensah also proposed the installation of fiber optic cable along the HRS line so passengers can connect to WiFi in the train while it travels long distances at speeds between 200-300 MPH. “I want a two-year-old in a village in Ghana to be able to learn from the tablet just like a two-year-old in the US, Europe, and the developed world”, he said followed by great applause from the conference participants.

“I believe several other colleagues of mine in the Diaspora, like Dr. Victor Laurence of New Jersey Institute of Technology, Dr. Dotsevi Sogah of Cornell University, Hypersonic Expert Dr. Isaiah Blankson at NASA, President of Dupont Africa Richard Okine, Dr. Osseo Assare of Penn State University and many others will consider moving to Ghana or serve as external advisory to help the country develop. This HRS proposal could also help solve the huge infrastructure deficit in Ghana” that has impeded huge foreign investments, in the country, according to Dr. Mensah.

Several prominent engineers and scientist according to Dr. Mensah who were trained in the US have returned to their respective countries to help develop the technology infrastructure base and today some of these countries like China, Singapore, South Korea, Taiwan, and India are exporting Cars, Satellites, Smartphones, Ships, High-Speed Trains, and Aircraft products and technology. “I Am not interested in complaining about the inconveniences of the system in Ghana, I rather want to become part of the return to Ghana movement to assist with fast-tracking its development”, said Dr. Mensah in this interview.

High-Speed Rail could be ‘significant legacy’

A significant legacy of transportation infrastructure development can be realized for Ghana through the HRS as the nation prepares to enter the 21st Century. Dr. Mensah said he will be “happy to see Members of Ghana’s Parliament, Cabinet Ministers, Vice President Bawumia, and His Excellency President Nana Akufo Addo and their grand-children get on this High-Speed Rail System.”, when implemented. The HRS proposal will address unemployment in Ghana especially for the youth and graduates of Universities in Ghana and bring a major Economic development to the Nation.

Dr. Thomas Mensah has authored 4 books on innovation, they are: Fiber Optics Engineering (1987), Superconductor Engineering (1992), his 2013 autobiography ‘The Right Stuff Comes in Black Too’, and ‘Nanotechnology Commercialization, an International Text Book’ (2017), is a holder of 7 US Patents awarded in a space of 6yrs. He is a Fellow of the US National Academy of Inventors , the American Institute of Chemical Engineers, and an Associate Fellow of the American Institute of Aeronautics & Astronautics.

I’ve increased TVET enrolment in SHSs by 44,000 representing...
26 minutes ago