Egypt look to join Ghana in Cup of Nations quarters 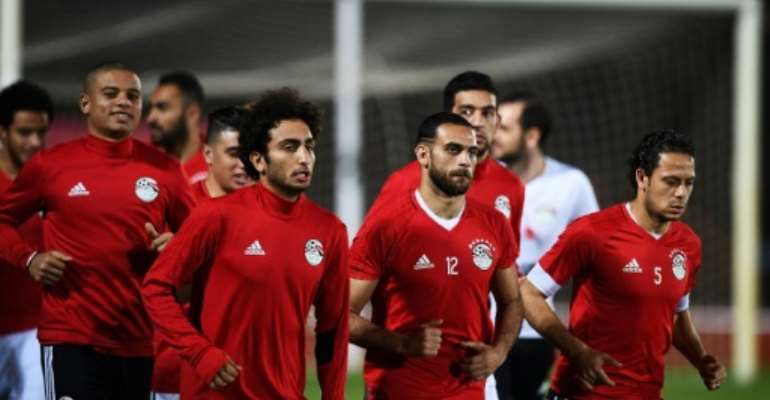 Egypt's players take part in a training session in Port-Gentil on January 22, 2017, during the 2017 Africa Cup of Nations tournament in Gabon. By Justin TALLIS (AFP/File)

Port-Gentil (Gabon) (AFP) - Seven-time champions Egypt face Ghana in Port-Gentil on Wednesday looking for the result that will see them join their opponents in qualifying for the Africa Cup of Nations quarter-finals.

The Pharaohs need only draw the game, which kicks off at 8pm (1900 GMT), in the Gabonese port city to be certain of progressing to the last eight, although if Mali fail to beat Uganda they will be through anyway.

Meanwhile, a win for Hector Cuper's side would allow them to leapfrog the already-qualified Black Stars and advance as group winners.

That might not be what they want, however -- the group winners will remain in Port-Gentil for the quarter-finals while the runners-up must up sticks to Oyem in the north of the country.

An awful pitch in Port-Gentil has had an adverse impact on the quality of the football played there and heavy rain in the city since the weekend will only add to the problem. 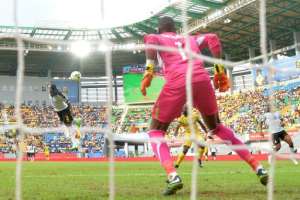 Ghana's Asamoah Gyan (L) scores a header during their 2017 Africa Cup of Nations Group D against Mali, in Port-Gentil, on January 21, 2017

"But for us we need to win, we want to win the group. It's about getting the points, it's not about the stadium."

Elmohamady, of Hull City, played when Egypt beat Ghana 1-0 in the 2010 final in Angola to win a third successive Cup of Nations final.

While Egypt have a doubt over full-back Mohamed Abdel-Shafi and 44-year-old Essam El Hadary remains their only fit goalkeeper, Ghana coach Avram Grant may be tempted to rest some first-choice players. 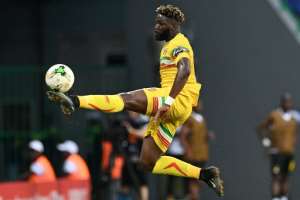 Mali's Molla Wague controls the ball during their 2017 Africa Cup of Nations Group D match against Ghana, in Port-Gentil, on January 21, 2017

Skipper Asamoah Gyan will hope to feature however. The striker netted the only goal in Saturday's victory against Mali and he has now scored eight times at the Cup of Nations over six consecutive tournaments.

The 31-year-old is also closing on a significant landmark as his next goal will be his 50th in international football.

"In tournaments you don't look for personal glory," he said at a press conference on Monday when asked about the significance of reaching his half-century.

"Maybe after if I get on the scoresheet then I can celebrate personal glory, but as a striker people expect you to score and I am here to win the trophy."

That is something he has not yet managed to do with the Black Stars winning the last of their four Cups of Nations back in 1982.

They have looked like one of the most accomplished sides so far in this year's tournament, despite losing left-back Abdul Rahman Baba to a serious knee injury in their opening 1-0 win against Uganda.

In Oyem, Mali must beat Uganda and hope Egypt lose if they are to stay in the tournament, but to do that Alain Giresse's side need to improve in front of goal having thus far failed to score.

Eliminated from the last Cup of Nations in 2015 in bizarre fashion after a drawing of lots with Guinea in a hotel meeting room in Equatorial Guinea's capital Malabo, another such scenario is possible.

Mali and Egypt drew 0-0 with each other in their first game and so if they end up locked on the same points and same goal difference, such a last resort will be required to separate them.

Uganda, meanwhile, are already eliminated so will hope to bow out of their first Cup of Nations in 39 years by registering a first goal and a first win.