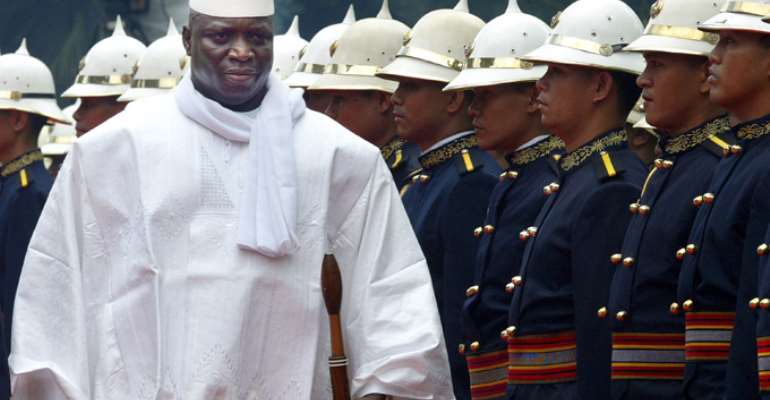 Ever since former president Jonathan made that call to president Buhari congratulating him on his “victory” at the last presidential polls, and following the enormous goodwill that has attracted to him worldwide, it is fast becoming a norm in Africa for incumbents to easily accept defeat at the polls and congratulate the winner.

Yahya Jammeh, the outgoing president of Gambia, was on his way to making history as one of the very few African presidents who would follow the enviable example of Nigeria’s former president and Africa’s hero of democracy, Goodluck Jonathan, by conceding defeat as an incumbent to an opponent in a political contest.

However, with his sudden u-turn on that stand, Jammeh, it seems, is about to throw that tiny West African country into a needless and avoidable turmoil.

After having been commended by major political players and the media worldwide, what could have caused Yahya Jammeh to retrace his steps just less than a week after conceding defeat and hailed the process that saw his closest rival, Adama Barrow, an otherwise political neophyte, emerge as the president-elect of Gambia as “the most transparent election in the world”?

Jammeh had told Barrow while conceding defeat to him, “I’m the outgoing president; you are the incoming president”.

He repeated the same thing in a televised statement when he said, “I take this opportunity to congratulate Mr Adama for his victory. It’s a clear victory. I wish him all the best and I wish all Gambians the best. As a true Muslim who believes in the almighty Allah I will never question Allah’s decision. You Gambians have decided”.

Even the Head of Gambia’s electoral commission, Alieu Momarr Njai had said: “It’s very rare that this present situation now, in Africa, that this happens”

The question on the lips of everyone is, why would Jammeh suddenly make a volte face after what seemed like a firm resolve to hand over power to the winner of the election, Adama Barrow?

The answer to this puzzle may not be far-fetched. Jammeh took his cue of conceding defeat from Nigeria’s Jonathan, he must have also thought he was making a mistake going by the happenings in Nigeria today.

With the relentless vindictive persecution of Goodluck Jonathan’s family by the Buhari administration, the unending vendetta against Jonathan’s former ministers and government officials, the use of the military, secret police and other security agencies to harass, intimidate and even kill innocent, harmless and helpless citizens in droves with little or no provocation, high-handedness in dealing with sections of the country that did not support the emergence of president Buhari, it probably became obvious to Jammeh the enormity of risks he is taking by conceding defeat.

Some of them might even be ready to face prosecution should there be any need for that, but then, they realize that what their counterparts in Nigeria are facing is more of persecution than prosecution. They must have all brought Jammeh’s attention to al the atrocities going on in Nigeria. Jammeh gives all these a long and hard thought, and then thinks it is not worth it in the end.

This is only just a part of the many consequences of Buhari’s tyrannical approach to governance in Nigeria. The message of his style reverberates across Africa. The goodwill and novel approach of incumbents conceding defeat in the continent is being endangered rather than being engendered. Consequently, Buhari’s style of leadership is rolling the political progress of Africa kick-started by that famous telephone call from Jonathan and his peaceful handover centuries backward.

Even Nigeria’s electoral system that was beginning to make tremendous progress under Jonathan has suffered unwarranted grievous attacks under Buhari. The nation’s electoral system has been so bastardised within the short period Buhari’s administration has lasted that electoral malpractices have been given an official toga.

Not even the ECOWAS court has been spared the torrid experience of having its court orders disobeyed by the Buhari administration as it concerns its pronouncement on Sambo Dasuki, Nigeria’s former National Security Adviser under Jonathan. It is therefore even more shocking that the same ECOWAS would rely on such a man to be a mediator in the political logjam about to befall Gambia.

Well meaning Nigerians have continued to warn that the autocratic manner Buhari is running Nigeria has very grave implications not only for the country but also for Africa. Gradually, those implications are beginning to unfold right before our very eyes. The UN that is asking Jammeh to accept defeat and hand over power to Barrow seem to be only interested in treating the symptoms of a disease without looking at the root cause of such a disease.

No one is saying that governments should not prosecute past governments where and when necessary, but everyone would want such prosecution not to degenerate into persecution, intimidation, harassment and vindictive pursuit of family members and officials of any previous government.

Diligent and civil prosecution of anyone would always encourage peaceful handover of power from one government to another in Africa. But first, the ECOWAS, AU, UN and other such international bodies must also not look away while any government deals with its people with an iron fist under the guise of fighting corruption and or other such otherwise noble guises.

Until this is ensured, there are likely to be many more Jammehs in Africa than anyone can imagine.