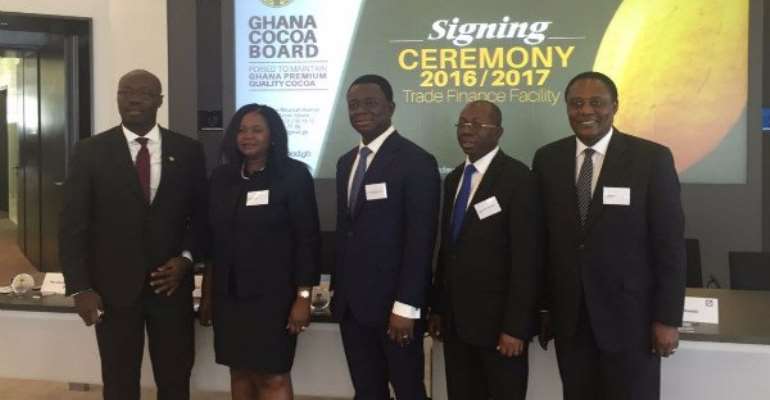 Ghana CoCOCOBOD has finally signed a $1.8 billion dollar loan facility with some 24 banks in Frankfurt, Germany at an all-inclusive interest rate of 1.47 percent.

This is far lower than government's cost of borrowing on the international market, in recent times which was about 9.25 percent.

However, some analysts say COCOBOD's track record in the repayment of the syndicated loan facility since 1992 has been the major contributing factor for the favorable interest rate.

Also, COCOBOD has a track record of never defaulting in the repayment of the facility.

The COCOBOD got more than $2 billion dollars worth of bids from the banks but agreed to take $1.8 billion.

COCOBOD, however, maintains that it can still go ahead and raise another $200 million when the crop performs better and requires further funds.

The loan facility is expected to be paid back fully by August 2017 as it has a 4 months moratorium and seven months repayment period.

COCOBOD is planning to use the funds to purchase Cocoa beans for the next crop season which runs from October to September 2017.

The funds will also help improve infrastructure in some cocoa growing communities like the cocoa roads which aims at opening up the remote cocoa areas to aid the carting of cocoa beans to buying centers .

Some analysts say the $1.8 billion loan which should hit Bank of Ghana's (BoG) account possibly in the first week of October will go a long way to improving the Central Bank's international reserves. This, they say will help stabilize the cedi in the coming months.

Meanwhile Chief Executive of COCOBOD, Dr Stephen Kwabena Opuni says they are committed to using the funds to improve the livelihood of farmers in the country and also ensure prompt payment of the purchase of cocoa beans from farmers.

In a related Development, Fidelity Bank Ghana was the only local bank that participated in the deal according to the Public Affairs Manager at COCOBOD Noah Amenya.

JOYBUSINESS is, however, learning that even though other banks like ECOBANK, Societe General SG and Barclays participated the deal was arraigned at the group level.