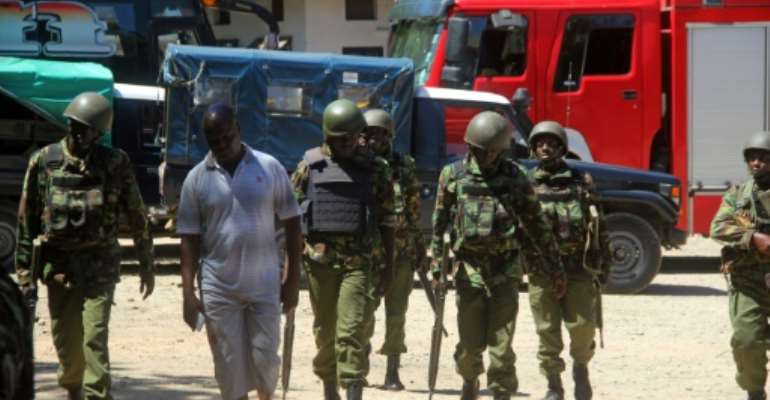 Police patrol outside of a police station in Mombasa on September 11, 2016, following a knife and firebomb attack by three women. By (AFP)

Nairobi (AFP) - Three women were killed Sunday while staging what officers said was "an apparent terror attack" at the main police station in the Kenyan city of Mombasa.

Police said two of the women involved in the knife and firebomb assault were Kenyans and that one was wearing a suicide vest that did not detonate.

Three of their alleged accomplices have been arrested.

"In the process one hurled a petrol bomb at the report office as the others confronted two officers and stabbed them," Maelo told journalists at the scene.

"All the three attackers have been killed and the two police officers have been rushed to hospital," he said, terming it "an apparent terror attack".

The fire was put out and the station sealed off by heavily armed police officers as the probe got under way.

"We have managed to identify two of the three terror suspects who were killed in Mombasa, they are Kenyans," police spokesman Charles Owino told AFP, naming them as Fatuma Omar and Tasmin Yakub Abdullahi Farah, both from Mombasa.

He identified Farah as the ringleader, saying she "had a suicide vest that did not detonate because she was shot down swiftly by officers".

He said police raided her home in Mombasa's Kibokoni area and arrested three accomplices, who are Somali refugees.

A senior police officer in Mombasa who asked not to be identified said earlier that the three attackers were wearing Muslim dress.

"This is terrorism, they were definitely on a mission," he said.

A witness named Saumu said "the women were shouting saying God Is Great, Allahu Akbar ... then one of them threw something at the cops and that's when I ran away."

The group is fighting to overthrow the internationally-backed government in Mogadishu which is protected by 22,000 African Union troops, including Kenyan soldiers.

The Somali-led insurgents have staged repeated attacks in Kenya, including the killing of at least 67 people at Nairobi's Westgate Mall in 2013 and the massacre of 148 people at a university in Garissa in April 2015.