Anything but the ANC: Johannesburg mayor makes his mark 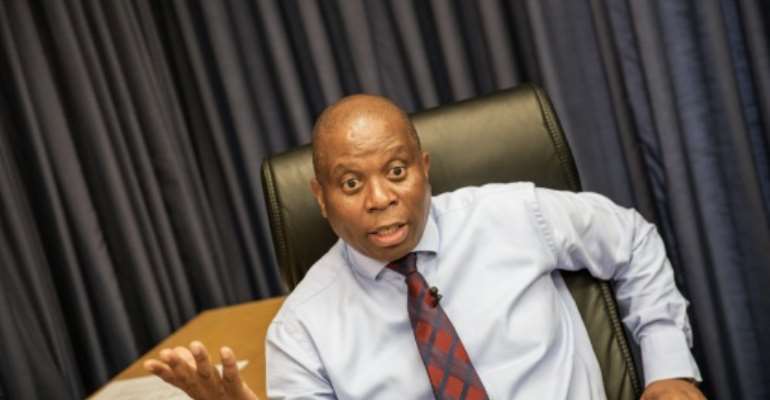 For the first time since apartheid Johannesburg's mayor, Herman Mashaba, is not from the ANC, but from the pro-business Democratic Alliance (DA) opposition party. By Gianluigi Guercia (AFP)

Johannesburg (AFP) - South Africa's biggest city Johannesburg is now run by a mayor who describes himself as an "unapologetic capitalist", after local elections that transformed the country's political landscape.

For the first time since apartheid, the city's mayor is not from the African National Congress (ANC), but instead from the pro-business Democratic Alliance (DA) opposition party.

And Herman Mashaba, a millionaire who made his fortune in black hair products, has set himself the ambitious goal of transforming South Africa's economic capital.

Mashaba, 56, was elected last month after the ANC failed to win an outright majority in the August municipal polls, and the DA and other smaller parties joined forces to wrestle it from power.

The change of control in Johannesburg dealt a humiliating blow to the ANC, the celebrated anti-apartheid party once led by Nelson Mandela and which still holds power at national level.

Speaking to AFP from his mayoral office in the bustling city centre, Mashaba pledged to run an investor friendly administration, and scrap the "socialist" policies of his predecessors.

"The problem with the previous administration is that they created a culture of dependency," he said.

"I am an unapologetic capitalist... I want people to take ownership of their lives."

Mashaba only entered politics in 2014 when he joined the DA and began a rapid rise to power that has attracted criticism over his lack of experience in both politics and local government.

"I know that the ANC would like us to fail," he said in his defence.

"I have been called a political novice... people said to me I had no chance of becoming mayor of Johannesburg (but) here I am now, 15 days into this office."

Mashaba, who founded his hugely successful Black Like Me hair company in 1985, said he would draw on his years in business to improve lives in the city.

"Local government is about everyday issues -- water, electricity and housing. We need to get that right," he said.

Johannesburg is home to major international companies and boasts the country's best infrastructure, including its first high-speed train.

But about half of its five million people live in poverty, according to official data that defines poverty as households with a monthly income less than 2,300 rand ($162).

Mashaba, who calls himself a "committed civil servant", has set himself a target of five percent annual economic growth -- in stark contrast to the national GDP rate predicted to be zero percent this year.

And he admits that his survival depends on the intricacies of dealing with other parties, including the revolutionary socialist Economic Freedom Fighters (EFF).

But he said that strong economic growth was achievable, and that the EFF had committed to support the DA "for as long as we run an accountable government".

Mashaba belonged to no political party until two years ago, and says he voted for Mandela and the ANC in South Africa's first multi-racial elections in 1994 and later for Mandela's successor Thabo Mbeki.

"In 1994 I was excited, I thought I was going to see an explosion of entrepreneurs coming out of South Africa," he said.

"Today, people are unemployed, people are living in squalor, people are failed dismally by the ANC government which is self-serving."

The DA, which is widely seen as being dominated by middle-class whites, won 27 percent of the vote in the local elections and is keen to further broaden its appeal ahead of presidential elections in 2019.

Mashaba's strong capitalist message may threaten its attempts to appeal to the poor who rely on state support and often live in appalling conditions in apartheid-era townships without water or toilets.

"It's no doubt that the poor should come first, that is a human rights issues," Mashaba, whose mother was a domestic worker, said.

"The problem with the previous city mayor was that he was more about style than substance.

"This city can be business friendly and pro-poor at the same time."

Whatever the political approach, the lack of jobs is a national crisis facing all politicians in South Africa.

At least 25 percent of the adult population in Johannesburg is out of work.

"By 2021, if unemployment in this city is still over 20 percent, then I expect people not to vote me back," Mashaba said in a typically bold pledge.

His performance in Johannesburg could be a test case for the DA, which now also rules Cape Town, Pretoria and Port Elizabeth, and hopes to eventually topple the ANC from power.

It is not a challenge that overawes him.

"Come elections in 2019, the DA will be ruling this country," he said.