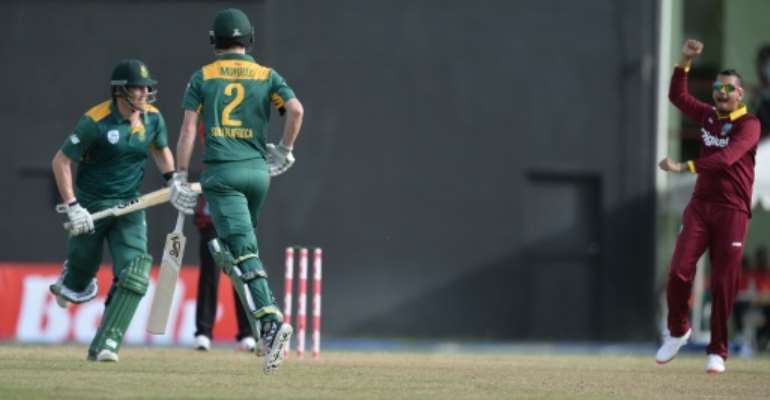 Providence (Guyana) (AFP) - Sunil Narine snared career-best figures of six for 27 on his return to West Indies colours as the hosts defeated South Africa by four wickets in the opening match of the Tri-Nation One-Day International series at the Guyana National Stadium on Friday.

Forced to remodel his action after it was deemed illegal during the Caribbean side's last ODI campaign in Sri Lanka last November, the 28-year-old mystery spinner was at his mesmerising best on a turgid surface where the South Africans were dismissed for 188 off 46.5 overs.

They found it difficult to establish any sort of momentum despite two useful partnerships at the top of the order.

Narine's returns were not only a personal milestone but also the best-ever by any opponents in one-day cricket against South Africa.

Kieron Pollard, back in the good graces of the West Indies selectors after 20 months in the ODI wilderness following the shock abandonment of the tour of India in October of 2014, then lifted his team to the target with 11 balls to spare with a robust unbeaten 67 that included six sixes.

It was the first time in 15 years that the Caribbean side had defeated the South Africans in a one-dayer on home soil.

Rilee Rossouw topscored with 61 and featured in a 78-run third-wicket partnership with skipper AB de Villiers.

That effort followed an opening stand of 52 between Quinton de Kock and Hashim Amla.

However the Proteas collapsed from the comparative comfort of 160 for three, their last seven wickets falling for just 28 runs with Narine befuddling the South African middle and lower order.

Rossouw was one of the spinner's scalps, falling to a good low catch by Carlos Brathwaite at first slip.

Brathwaite had earlier broken the opening stand of de Kock and Amla, de Kock attempting an injudicious heave to be comprehensively bowled.

Narine then made his first strike by trapping Amla leg-before in the very next over.

Yet it was the demise of de Villiers that proved to be the most crucial.

Playing well within himself and being mindful of the challenging batting conditions, he compiled 31 off 49 deliveries without a single boundary but fell to a good catch off his own bowling by pacer Jerome Taylor at the start of the 31st over.

South Africa had just ended a period of 23 overs without finding the boundary rope and it appeared de Villiers and Rossouw were on the cusp of acceleration before the captain's departure.

From then on it was the Narine show as he scythed through the rest of the visitors' batting.

Set a relatively modest target, the West Indies opening pair of Johnson Charles and Andre Fletcher rode their luck in a 37-run stand before the introduction of the spinners changed the complexion of the chase.

Imran Tahir deceived and bowled both with googlies while Aaron Phangiso and part-timer J.P. Duminy removed Marlon Samuels and Denesh Ramdin respectively to have the hosts wobbling at 76 for four.

But Pollard, whose first three scoring shots were towering sixes, dominated a 74-run fourth-wicket stand with Darren Bravo to take the West Indies closer to the target.

Bravo fell to Phangiso for 30 and Carlos Brathwaite, the final over hero of the World T20 triumph in India two months earlier, perished attempting a bit hit of Phangiso.

But captain Jason Holder joined Pollard to ensure there were no more alarms on the way to a morale-boosting victory for a team classified as underdogs alongside the South Africans and ahead of Sunday's meeting with World Cup holders Australia at the same venue.

Teachers Are Better Off Under NPP Than NDC — Education Minis...
43 minutes ago

COVID-19 Still With Us, Follow Protocols – Okoe Boye To Ghan...
51 minutes ago