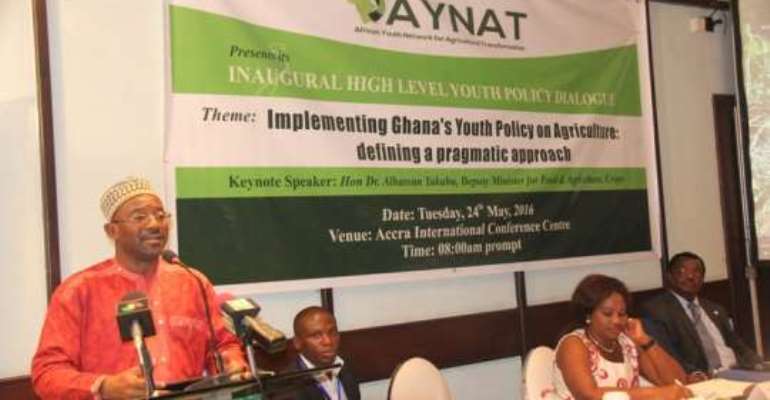 By Iddi Yire, GNA
Accra, May 25, GNA - Dr Ahmed Yakubu Alhassan, a Deputy Minister of Food and Agriculture, has urged the youth to see Agriculture as a life-long occupation, just as lawyers take up their professions for life.

He explained that, Agriculture was the most important instrument for the government and it had the greatest potential in solving youth unemployment.

He said it was in this direction that the Government initiated and institutionalised the Youth in Agriculture Programme (YAP) to help create more jobs for the youth.

Speaking at a Youth Policy Dialogue Forum, in Accra, Dr Alhassan said: 'Government will continue to urge the youth to take up Agriculture at a high entrepreneurial level to improve their income.'

The forum, on the theme, "Implementing Ghana's Youth Policy on Agriculture, defining a Pragmatic Approach", was organised by the African Youth Network for Agricultural Transformation (AYNAT) with financial support from the Africa Lead of the United States Agency for International Development (USAID).

AYNAT is one of the nine Champions for Change networks formed by Africa Lead to champion the cause of transformational Agriculture and "scaling up for food security", in Africa.

The forum brought together more than 70 participants to empower them to go into agribusiness.

Dr Alhassan said between 2009 and 2012, YAP provided support for about 250,000 youth in Block Farming, Aquaculture and other forms of skills with emphasis on maize, rice and vegetable farming.

The Deputy Minister said under YAP, up to 500 youth had been engaged in fish farming in the Volta River within the Volta and Eastern Regions.

He said the Programme had a challenge of recouping project funds from beneficiary farmers, which had rendered the programme dormant in subsequent years, though training and other support were still being offered to young farmers.

He said the challenges were clear indications that the public purse alone could not create jobs for all Ghanaians; adding, that positioning Agriculture well, would create more jobs for the youth.

He said the Government would have to partner with the private sector to create more job opportunities for the youth in Agriculture.

Existing viable incubator farms were being identified by the government, so that they would serve as training centres for youth in agriculture, he said.

Dr Alhassan said, according to the Ghana Statistical Service, the youth constituted about 40 per cent of the labour force, but the unemployment rate among them was about 12.80 per cent.

Ghana's policy framework to get the people into agriculture was in line with current global happenings, such as Agriculture Modernisation, he said.

Mr Edem F. Azagloe, the President of AYNAT, said his organisation was devoted to making sure that a proportion of Africa's youth population armed itself with skills and knowledge to make significant contributions and champion the transformation of Ghanaian and African agriculture through capacity building, policy advocacy and research.

He said AYNAT's objective was to build and strengthen the capacities of the youth in agriculture to scale up food security.

He lauded Africa Lead and the USAID for their continued support for AYNAT.

He urged the Government to continue to put in place policies and programmes that would empower the youth to go into agriculture.

It is done through building the capacity of champions, institutions and stakeholders to develop lead and manage the structures needed for African-led agriculture transformation', she explained.