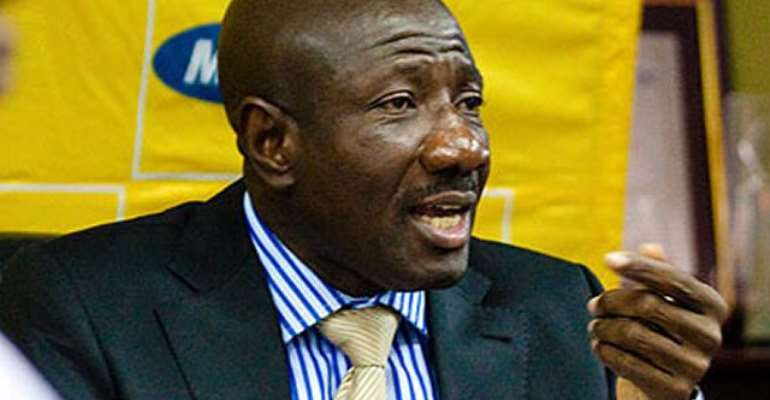 MTN Ghana CEO, Ebenezer Twum Asante says the only way telecom operators can be profitable in Ghana is for the country to have a maximum of three players.

He noted that what is currently happening in the industry, in terms of dwindling profits and the market share and subscriber base trends, show that the industry is gradually consolidating around four players.

According to him, those are indications that unofficially, the industry is merging into four players, but in a few years it will be made official.

"The market can do with four players but in our estimation at MTN the way to ensure real profitability and sustainability is for us to have maximum...maximum of three players," the MTN boss told Adom News Editor Sammy Dowuona.

He therefore predicted only one of the three BWA will remain independent and the others will eventually merge with existing telcos to take advantage of the several opportunities in the data market, which the BWAs don't have the funds on their own to take advantage of.

Indeed some telcos have hinted of partnership discussions they are having with some of the licensed BWAs in the country to collaborate in deploying 4G LTE widely, since the BWAs largely lack the requisite financial muscle to spread nationwide.

Ebenezer Asante is not the first to have predicted mergers in the Ghanaian mainstream telecoms market.

Each of the industry "prophets" pointed to the size of the Ghanaian population size as well as stiff competition and their impact on operators' profitability, or lack of it, as factors that will drive strategic mergers.

Currently, the sole CDMA player Expresso Ghana has already sold 18% shares and placed the remaining shares in an escrow account.

Meanwhile, the latest GSM player, Glo Ghana has not been doing too well since it entered the market four years ago.

Indeed, at the time Glo came in, some telecom CEOs then felt it was a wrong move for the government to have licensed a sixth voice operator in a small market like Ghana because it was going to neutralize the profits of existing players.

True to the fears of the telecom CEOs, currently, it is only MTN which is actually ploughing back profits after tax; the rest are either breaking even, gradually inches towards breaking even or making loses.

Already, one of the leading MVNOs in the UK, Lebara is in town and are almost set to start operations on Airtel, while other licensed MVNOs have obtained space on Expresso, and others are in talks with other telcos.

Ebenezer Asante believes, with a mobile voice penetration of about 130% the voice market in Ghana is over saturated but there exists opportunities in the data market, and that is where possible new entrants should focus on.

"I don't see new entrants coming in but if they do, I see them going into partnership with existing telcos to develop new models in the data space because it will not be worth their while to make investments from scratch," he said.

In the opinion of the MTN Boss, the existing opportunities in the industry are not stand alone opportunities, but rather linked to existing services already being offered by existing telcos so it will not make economic sense for any new entrant to treat those services as niche.

Asked if MTN was considering buying out or merging with any of the existing telcos, he said that is a strategic decision which can only be taken based on factors such as the scope of the consolidation and what value is there to be derived from the new business that will emerge from the consolidation.

Caution
Ebenezer Asante cautioned that the fact that the environment is ripe for consolidation does not mean players should jump into that space immediately.

The MTN boss also asked "would consolidation mean you consolidate your assets to be able to derive better value from whatever eventual business you create out of the consolidation - once you have the benefit of these information then you can make a call," he said.

But Ebenezer Asante stated categorically that environment is ripe for consolidation and the process has started unofficially and soon it will be made official.