29 killed, including 12 foreigners, in Al-Qaeda attack on Burkina hotel 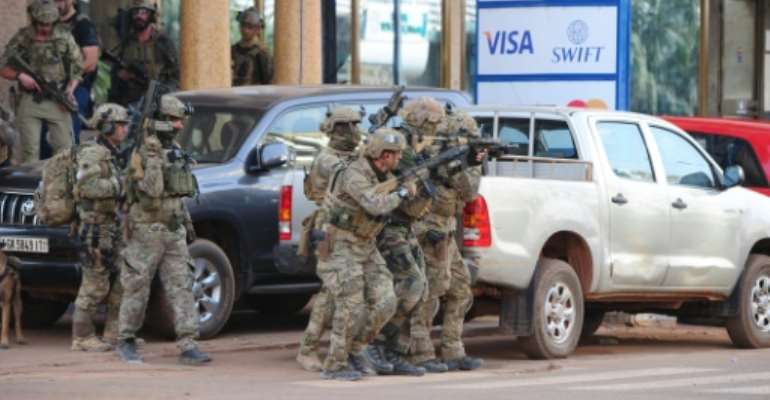 Ouagadougou (AFP) - At least 29 people, including at least 12 foreigners, were killed in an Al-Qaeda attack on a top hotel in Burkina Faso, an unprecedented strike in the capital illustrating the expanding reach of regional jihadists.

The hours-long drama which began late Friday saw Burkinabe troops, backed by French special forces, battle militants who stormed the four-star Splendid Hotel, which is popular with foreigners and United Nations staff, and took more than a hundred people hostage.

Burkina Faso declared three days of national mourning following the attack, which mirrored another Al-Qaeda attack on a luxury hotel in neighbouring Mali where 20 people were killed, mostly foreigners.

"For the first time in its history, our country has fallen victim to a series of barbaric terrorist attacks," he said, adding that the people of Burkina would nevertheless "emerge victorious".

The attack began around 7:45 pm on Friday when an unknown number of attackers stormed the 147-room Splendid Hotel in the heart of Ouagadougou.

The hotel and its surrounding area turned into a battleground as Burkina Faso troops, backed by French forces based in the city under a regional counterterrorism initiative, launched an attempt to retake the hotel around 2:00 am.

A total of 29 people were killed in the attack on the hotel and a nearby restaurant, including six Canadians, two French and two Swiss nationals as well as an American and a citizen of Portugal.

Interior Minister Simon Compaore said the bodies of three "very young" jihadists had been identified, all of them men. A security source said earlier that at least four attackers had been killed, two of them women.

Al-Qaeda in the Islamic Maghreb (AQIM) has claimed the attack on behalf of an affiliate, saying the strike on the former French colony was in "revenge against France and the disbelieving West", according to a statement carried by US-based monitoring group SITE.

AQIM said the gunmen were from the Al-Murabitoun group of notorious Algerian extremist Mokhtar Belmokhtar.

The attack will heighten concerns that jihadist groups are casting their net wider in search of targets in west Africa, two months after the hotel siege in Mali.

The US, which has a small military contingent in Burkina Faso, meanwhile said it supported French forces in the operation to retake the Splendid Hotel.

Several guests managed to escape from the hotel through side entrances, including labour minister Clement Sawadogo, who emerged unscathed.

"It was horrible... there was blood everywhere. They were firing at people at close range," Yannick Sawadogo, one of those who escaped, told AFP.

"They were walking around people and firing at people who were not dead."

The scene was cordoned off by yellow police tape on Saturday, while officials carried off corpses in blue plastic bags.

Campaore told AFP that 10 bodies were discovered on the terrace of the Cappuccino restaurant, which lies next to the hotel.

French President Francois Hollande led international condemnation of what he described as an "odious and cowardly attack".

Also on Saturday, the Burkina government said that two Australians were kidnapped Friday in the northern Baraboule region, near the border with Niger and Mali.

Malian militant group Ansar Dine told AFP the couple were being held by jihadists from the Al-Qaeda-linked "Emirate of the Sahara".

The pair had been running a surgical clinic in the north of the country since 1972, and no reason has been given for their kidnapping, a statement from their family said.

The attack in Ouagadougou was unprecedented in Burkina Faso and comes as people were enjoying a return to stability after the November elections which ended a shaky transitional period since veteran leader Blaise Compaore's 2014 ouster, including a failed coup.

"The elections went off well," said Cynthia Ohayon, a security analyst with the International Crisis Group. "That makes the country a symbol of progress, which is what those people want to destroy."

Al-Murabitoun had already begun to move into the impoverished country of around 17 million. In April, it claimed the abduction of the Romanian security chief of a mine in the country's north.