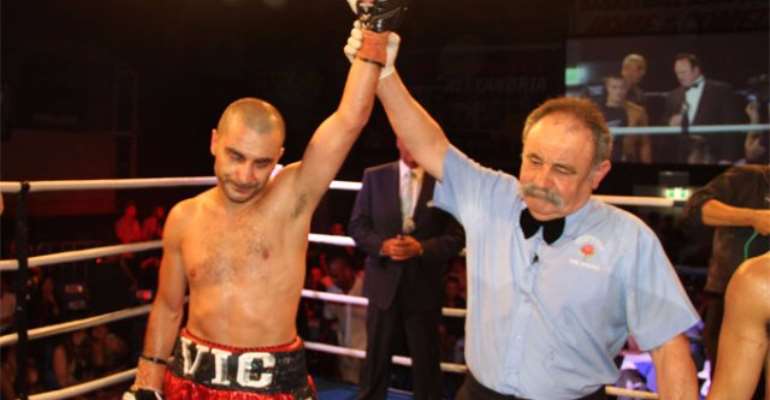 It was a scheduled ten round bout and so Vic captured the WBC Asian Boxing Council super bantamweight title at the Alexandria Basketball Stadium, Sydney, Australia.

Ray Wheatley of the World of Boxing reported that Paulino "connected with accurate combinations in round one against the aggressive Darchinyan, who had problems finding the range against the the mobile sharpshooting Filipino."

However, the 39-year-old former world champion - who lost to Joseph Agbeko in 2009 - stepped up aggressively in round two and dropped Paulino with a powerful

body shot.
Paulino took the mandatory eight count but finished on unsteady legs forcing his cornermen to throw in the towel to save him from

Wheatley reported that "the action see-sawed in rounds one, two and three as both Kambosos and Delos Reyes took command

of the contest in an entertaining 135 pound bout that had the fans on the edge of their seats. But at 2:34 of round four, referee Pat O’Connor crowned Kambosos the winner after he dropped Delos Reyes with a perfectly timed right hand bomb to the head."

Delos Reyes taken to hospital but was later released and will return to the Philippines later this week to marry his fiancé."